The Book Thief by Markus Zusak 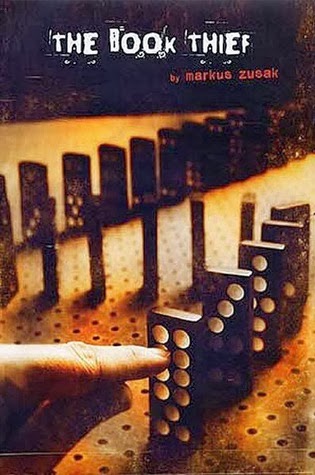 It is 1939, Nazi Germany. The country is holding its breath. Death has never been busier, and will become busier still. The narrator is Death, a sympathetic Death worn out by all the people he has collected over time. I hope I can find the words to do justice to this very moving book.

It is the story of Liesel Meminger, a young German girl, abandoned by her mother, who goes to Molching, a suburb of Munich, to live with foster parents, Hans & Rosa Huberman. She becomes the book thief when she picks up a book by her brother’s graveside. It’s her first act of book thievery, but not her last. Thus begins her love affair with words and books. Soon she is stealing books from Nazi book-burnings, the mayor’s wife’s library, wherever there are books. It is about the power of words, Nazi propaganda, versus the power of words to heal that enables Leisl to cope with her life.

In a book full of unique and interesting characters, my favorite person was Hans Huberman, a kind, loving, patient man who teachers Leisl to read while quieting her nightmares about her dead brother. He fills the shoes of the father Leisel has never known. Plus, he willingly and unselfishly hides a Jewish man in the basement of his house, knowing the penalty for disclosure.

Readers will identify with the struggle of ordinary people, young and old alike, to survive in the hell that was Nazi Germany. It is heartbreaking yet uplifting to see people risking their lives on behalf of fellow humans whether Germans or Jews.

Mr. Zusak’s writing is incredible. His phrasing and descriptions are haunting. It is a very intense read, but the author manages to inject humor that alleviates some of that intensity.

This is a story of love, courage, friendship, survival, resilience, grief, and death, but most of all, about the human spirit. Be prepared to cry.

Disclosure: I bought this book. I was not compensated in any way, nor told how to rate or review this product.