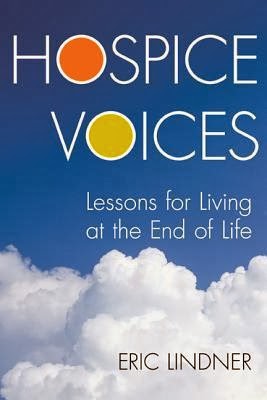 
Since I work with seniors who have dementia, I was immediately attracted to Hospice Voices, written by a hospice volunteer about the life lessons he learned through the everyday folks whose lives he touched, but more importantly who touched him. I felt I could relate because I’ve learned so much since I started working with seniors four years ago.

I enjoyed these stories, some of which sounded familiar because of my work experience. I think the one I enjoyed the most was about Dolly, the ninety-four year old Italian-American woman from New Jersey. I loved it when Lindner had pignoli (pine nut cookies) delivered from Little Italy to Virginia's Piedmont because Dolly hadn’t seen pignoli cookies since her wedding! His description of her reaction was so funny.

Lindner succeeded in bringing to life the people he worked with and visited. The last account of his daughter’s Sarah’s fight with thyroid cancer was moving and scary because she is so young.

Lindner writes with a keen eye for details (he’s an attorney) with a kind but honest voice. There were times when I had to reread sentences that were super long and filled with references to people, places and events I was clueless about. These run-on sentences were distracting at times, and his writing reminded me somewhat of journalist David Oliver Relin who co-wrote Three Cups of Tea and also had this same problem. But his writing is also self-deprecating and infused with humour.

There are black and white photos at the beginning of each anecdotal accounts of his patients, but they are not labelled so at times I wondered if they were who I thought they were.

Most of all, I enjoyed how the author ended with a section on Dos and Don’ts that summarized what he’d learned from his experience as a hospice volunteer, as a father and as a son with aged parents. They are good life lessons. Lindner’s insights, kindness and reflections made this book a very worthwhile read. Best of all, I found this book inspiring and not depressing despite the very present topic of dying.

About Eric Lindner:
Eric Lindner is an attorney and entrepreneur. He has been a hospice companion caregiver since 2009. He divides his time between Warrenton, VA and Kauai, Hawaii.

Disclosure: Thanks to the publisher and Premier Virtual Book Tours for sending me this book for review. I was not compensated in any other way, nor told how to rate or review this product.