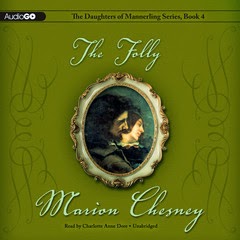 This is the fourth book in the Daughters of Mannerling series and I keep enjoying the characters more and more. The first book was The Banishment, the second The Intrigue and the third The Deception. In this installment, the focus is on Rachel Beverley. The two eldest sisters have been married and also Rachel’s twin sister Abigail. Their mother is disappointed that none of them managed to secure back their precious home Mannerling that was lost in a gambling match by their late father. This, even though, they all married very well despite having no dowry.

A new owner now resides at Mannerling, the widower Mr. Charles Blackwood, along with his two young children, Mark and Beth and their grandfather, a retired general. The remaining three sisters, Rachel, Belinda and Lizzy still dream of getting Mannerling back, but they are rather disappointed that the nearly forty Mr. Blackwood is too “old” for them. Rachel, at 19 feels the same way, but she is a mature and loving girl who becomes attached to Mr. Blackwood’s children and actually chastises Mr. Blackwood on their first meeting for neglecting them to their cold and nasty governess.

Despite the age difference there is an attraction between Rachel and Charles. Once again the wonderful and efficient Mrs. Trumble, the governess to the Beverley sisters, guides her charges well. She continues to be my favorite character because of her wit, her stand for women’s rights, and her mysterious past that hints at a woman of high standing who would only marry for love, unlike her contemporaries.

There is plenty of action this this installment too. Plans for murder, sights of hauntings at the Mannerling home, a scheming beautiful rival and mysterious pasts. I thought I might get tired of the Beverley sisters’ infatuation to get back their precious Mannerling, but Chesney does a great job at keeping us entertained with delightful and villainous characters that I just keep enjoying each book more than the last in this series.

The narrator, Charlotte Anne Dore just keeps getting better, and I thoroughly enjoy her portrayals of the characters. She helps them to come alive in my mind. Recommended to all lovers of fun Regency romances.

Note: This book is rated S = mild sexual content (kissing and some fondling).

Disclosure: Thanks to AudioGo and Jukebox Audiobooks for sending me this audiobook for review. I was not compensated in any other way, nor told how to rate or review this product.