The Thunderbird Conspiracy by R.K. Price 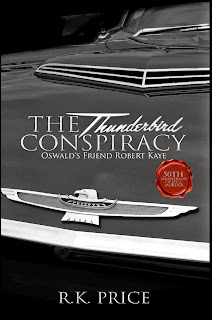 The 50th anniversary of the assassination of President John Fitzgerald Kennedy by Lee Harvey Oswald is November 22, 2013. Most of those alive on that fateful day remember exactly what they were doing then. They recall CBS news anchor Walter Cronkite valiantly holding back tears as he appeared on national television to announce the death of the 35th president of the United States. And like many people, I always believed that Lee Harvey Oswald did not act alone. That being said, I was excited to receive this book that the author claims is historical fiction based on actual events.

I suppose that the conspiracy theory talked about in the book is plausible, but I felt in reading it that there is more fiction than actual fact. The story is seen both through the eyes of the author’s uncle, Bud Carlson, who claimed to know Robert Kaye, Oswald’s purported friend and conspirator, as well as through Robert Kaye’s eyes. The author admits filling in the gaps in Kaye’s life, making up his relatives in Hungary and speculating on both how and why he became a player in the conspiracy to kill Kennedy. Robert Kaye’s dream sequences of his life in Hungary were too repetitive. It took 200 pages of speculation on Kaye’s background and details about Uncle Bud’s life before the story began to deal with the actual details leading up to the murder of JFK.

R.K. Price raises some interesting questions in his book, probably the most intriguing being why does the name Robert Kaye appear many times in FBI case files but never came up in the investigation of Kennedy’s death? And why were Bud and his family subjected to 24-hour FBI surveillance for months? And Bud to endless FBI interrogation because of knowing Robert Kaye?

While the author spins an interesting tale, a lot of the story is couched in crude, unsavory language, including plenty of f-bombs and religious expletives.

I found it difficult to really connect with any of the characters, although I did feel a certain sympathy for Bud.

Fans of JFK conspiracy theories have another book to add to their libraries. Who knows? Perhaps this one is true.

Disclosure: Thanks to R.K. Price and Virtual Author Book Tours for sending me this book for review. I was not compensated in any other way, nor told how to rate or review this product.