Will in Scarlet by Matthew Cody 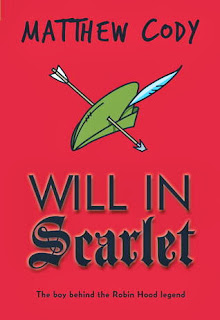 Although Robin Hood was one of my favourite heroes growing up, I had only known his story through television and never read a book about him. So when I saw this middle-grade version I decided to read it with my twelve year-old daughter. We enjoyed it a lot, although the story is a little darker than what the cover implies. It felt more YA to me, and the writing style will appeal to adults as well.

Will Shackley is a thirteen year-old boy living during the medieval reign of King Richard. His father, the lord of Shackley Manor is fighting the Crusades with the king and is soon presumed to be imprisoned. When Sir Guy, a venomous man who takes sides with Prince John, comes to the manor and stirs trouble, Will retaliates and is then forced to flee for his life. He becomes separated from his mother and ends up in Sherwood Forest where he meets a group of bandits known as the Merry Men. He takes on the name Will Scarlet and plots his revenge against Sir Guy.

There is plenty of action in this novel, although there are also some slow spots in the beginning. The book really took off for my daughter mid-way. I liked that the characters are very well-built. Among the ones I liked the most were Will, Much (a girl disguised as a boy) John Little, and Rob, the drunkard. My daughter liked Much because she was a tough female character. The bond that forms within this group builds just as the tension does in the story. Will who was initially mistrusted finds his place in the group of misfits. My daughter especially liked the friendship between Will and Much because they are close to her age.

This is the story of a boy who becomes a man. It's not a light-hearted tale as there are scenes that depict the reality of many situations. But there are laugh-out-loud moments too. There is intrigue, danger, loss and friendship. The plot is great and unpredictable, with a bit of a twist. The ending leaves room for more to come, and we look forward to reading more adventures of Will in Scarlet.

Note: This book is rated V = violence for sword fights and killing.

Disclosure: Thanks to Netgalley for a copy of this book for review. I was not compensated in any other way, nor told how to rate or review this product.