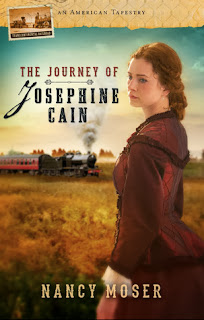 
Because I loved Masquerade by this author, I had high expectations for this one. Maybe too high because I was disappointed by The Journey of Josephine Cain.

Josephine has lost her brother and cousin to the Civil War and feels stifled in a house with a mourning mother and aunt. She is a wealthy general's daughter brought up in an elite society and wants to get married. When her father returns from the war and announces that he is going out West to supervise the building of the Transcontinental Railroad, she wants to go too, but is not permitted. Lewis Simmons enters the picture and they become engaged. When they go out West for the Meridian celebration, she meets Hudson Maguire, an Irish railroad worker. She also gets to see how wild the West really is, but wants a new life. She gets her new life, but for me it came too easy and conveniently for her.

The premise of the story was what caught my attention, but most of Josephine's story does not take place in the Wild West, which is what I was expecting. Overall, I found the story to be a little unrealistic, the characters superficial and the plot predictable and unexciting. I found Lewis to be an encumbrance in the story and could not see what Josephine liked about him. Having been born and bred in society, couldn't she and her parents see that he was a fraud? I wish the author hadn't spelled out what his intentions were from the very beginning as it killed all suspension for me. Hudson came across as an American and not Irish at all. The romance was...let's see, there wasn't much of it. The story did get a little more interesting three-quarters in the book because it took place in the West and there was a little more action.

There is something else that bothered me too. Josephine's mother was portrayed as stiff-lipped and uncaring while her general father came across as benevolent and pious. Yet, the father spent 4 years at war and then on his return promptly took off to the West, abandoning his mourning wife with an unsympathetic daughter. He never sent home letters. His wife knew of his exploits in the West because she read about them in the newspaper. And this is supposed to be a Christian husband? Josephine was young so her parents would have been a couple in their mid to late forties. Not old by any standards. Yet the father showed no affection toward his wife nor any need for one. When the railroad men took to going to the local brothel, he was not one of them. Married but without a woman for over five years, and he never strayed? He was a man driven by ambition and little else.

What can I say, I wasn't crazy about any of the characters in this novel, didn't buy the whole theory that God led their path in life, felt somewhat sorry for Josephine's mother and actually liked the prostitutes more than all the other characters.

But I seem to be the minority in not having enjoyed this book. I suggest you read other reviews of bloggers who really liked it. Visit the Litfuse blog tour page.
To participate in the giveaway of one of five copies, please visit this page.
Purchase a copy: http://ow.ly/pq47s 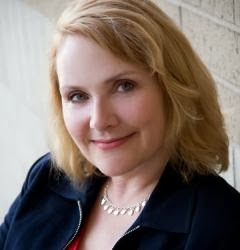 About the author:
Nancy Moser is the best-selling author of more than twenty novels. She is a winner and two-time nominee of the Christy Award, and her latest novel was named to Booklist's "Top 10 Romance Novels of 2011." Nancy and her husband have three grown children and three grandchildren, and they live in the Midwest.

Learn more at Nancy at: http://nancymoser.com/.

Disclosure: Thanks to Litfuse for sending me this book for review. I was not compensated in any other way, nor told how to rate or review this product.