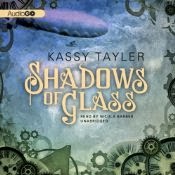 
This is Book Two in the Ashes trilogy and I have to say, one again, I loved not only the sequel but also the excellent narration by Nicola Barber. (Read my gushing review of Ashes of Twilight.)

Wren and Pace have made it outside the dome with a few other survivors, but it came at a great cost. Many of their friends have died and James blames Wren. Life outside the dome offers new discoveries but it's also a dangerous place, with wild rovers who hunt them down. The small band of survivors get help unexpectedly from a group of explorers that come in on an airship from across the sea. Among them is Levi who is as intrigued with them and Wren, as she is of him and his family. Wren begins to question her feelings for Pace when she is put in the position of fighting off the rovers with Levi at her side. Levi seems to understand a part of her that is troubled. When they get word from inside the dome, Wren knows she must go back to help her friends, but she is terrified she won't be able to escape again.

I thought this was a great sequel to the first book. Once again, Tayler is a great storyteller and I loved this book just as much as the first book for all the same reasons. The author introduces a love triangle, which I don't always like in books but somehow it seemed to fit in this book because being outside the dome is a world of discovery for Wren. Levi was like no one she had ever met before. He has seen the world and recounts his adventures to Wren who is simply fascinated. I understood how she began questioning everything she knew as she adapted not only physically but also mentally to this new world and new found freedom.

The whole book takes place within a week or so, and a lot of things happen in that short time. The ending was a cliffhanger, leaving me to wonder how it will all come to an end. Once again, I absolutely loved Nicola Barber's narration. She brings the characters to life. In the first book, all the characters had different English accents (I love how she can switch from one to the other with such facility!) but in this book she also had to use an American accent, which I thought she did quite well. I think I will listen to anything narrated by her.

This is one of the best dystopian steampunk trilogies I've read, and I can't wait to read the third book.

Note: This book had some bloody scenes of violence but nothing over the top. No bad language and no sexual content except kissing.