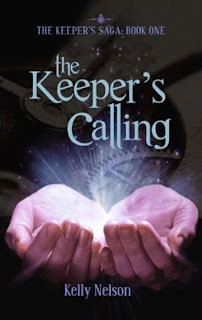 
My daughter and I really enjoyed reading this fun time-travel adventure story. We got hooked right from the beginning when 16 year-old Chase Harper finds, in a cave, a counter that looks like a pocket watch. He touches the dials and gets transported to 1863 where he meets Ellie Williams. In time, Chase discovers what the counter can do and that it had once belonged to Ellie's grandfather. The story is well-written and suspenseful and we were loving it until we got to one part. More on that later.

The author does a great job of showing us both Chase's teen world in 2011 and Ellie's world in the wilderness of Utah territory in 1863. Both Chase and Ellie evolve as characters as the plot intensifies and danger follows them as enemies want the counter. Suspense keeps the story moving at a rapid pace and we both wondered where it would lead.

Both my daughter and I liked the main characters. The story is told from Chase's point-of-view and the author (who has four kids) captures the teen's voice very well. The story was humorous too when both Chase and Ellie each had to adjust to different time periods. My daughter bursts into laughter several times. The blend of adventure, suspense, and romance is well-done and makes for an exciting read.

A little over half-way into the book, however, there is a chapter where Chase is summoned by the Master Keeper and Chase discovers that he is the Keeper or Protector of the counter and that there is a war going on between two magical dimensions. The Master Keeper is a sorcerer and seer and he has control over Chase. At this point, my daughter and I stopped reading the novel. We do not read anything that dabbles in spiritism, such as with witches, sorcerers and their black magic. (Deut 18: 9-13) We were disappointed that a Christian author would include this and did not expect it.

Looking through the rest of the book, we noted that there was no more mention of the sorcerer throughout the rest of the story, so we finished it. We liked the ending. It was satisfying, although it did not answer any of the questions about how Chase and Ellie would be affected by the outcome of the war. But my daughter and I didn't care about this aspect. This is the first book in The Keeper's Saga, and we have decided not to read the others because of the spiritistic element. Apart from that one scene, we enjoyed this as a time-travel adventure book.

Note: There is some violence in this book during fight scenes and one gruesome scene of finding a dead body. There is also a scene with a powerful sorcerer who controls a character's mind.
I will count this book toward the following challenges: A-Z Book Reading Challenge