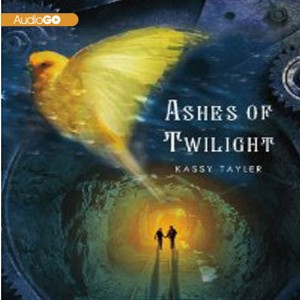 This is one of the best YA audiobooks I have listened to this year! I didn't really know what to expect when I requested to review it. I was hooked from the first 10 minutes of listening.

Wren MacAvoy is a 16 year-old girl who lives in the bowels of a domed city that was constructed in the mid-nineteenth century to protect the royal blood line of England when astronomers spotted a comet on a collision course with Earth. She works as a coal miner, living with only her grandfather, since her mother died giving birth to her and her father is unknown to anyone. Nearly 200 years have passed since the dome was built and now the coal is running out. When one of Wren's friends manages to escape the dome and is burned alive, his last words to her is that the sky is blue. This sets things in motion as Wren longs for light and ends up unexpectedly helping a young cadet city enforcer, Pace Bratton, who knows too much about the outside world. Together they fight for the right to leave the dome.

First off, I have to mention the fantastic narration by Nicola Barber because I think, for me, it made all the difference and is one of the reasons I loved this book so much. She is English and captured all the different accents of the characters so well from working class to educated, it really transported me to Wren's world. I felt the emotions of the characters in that voice, I pictured the characters through it, and I never tired of hearing it. I definitely hope she continues to narrate the two other books in this trilogy.

Wren is a strong intelligent character who questions her world and learns to appreciate her people as the story progresses. The growing romance and attraction to Pace is well done, exciting and hopeful. The story is filled with action and adventure, interspersed with reflections, twists and turns, and suspense. Surprisingly, her grandfather's Bible is mentioned a few times as the only book that Wren read several times and she quotes from it as she starts her story, “The Bibles teaches us that the heavens and earth were made by the one true God”. I was instantly intrigued. This novel is classified as dystopian steampunk, and I wondered where the story led. I wasn't disappointed. Don't misunderstand me. This is not Christian fiction at all, but the morals are good and the characters strive to be honourable.

Tayler's world building is awesome. We can simultaneously feel the darkness and claustrophobia in the tunnels, and yet also feel the safety of being cocooned within its caves, hidden from the upper world that hunted the young couple. The characters are distinct and they each stand out in their own way, thanks in part to the great narration. I loved both Wren and Pace. I rooted for them. I liked the way the author built tension, wrote her dialogue, and totally encompassed me into that domed world.

I loved the way this story ended. It actually brought tears to my eyes. I know that this is the first book in a trilogy, but I would have been happy nonetheless if there had not been a continuation. I also love the book cover and title. They suit the novel beautifully. The yellow canary is as much a character in this novel as the others and symbolizes freedom. I recommend this audiobook to all lovers of YA books.

Note: This book had some scenes of violence but nothing too descriptive or over the top. No bad language and no sexual content except kissing.

will count this book toward the following challenges: Read Dystopia Challenge

Disclosure: Thanks to AudioGo and Audiobook Jukebox for sending me this audio book for review. I was not compensated in any other way, nor told how to rate or review this product.