Cardboard: A Woman Left for Dead by Fiona Place 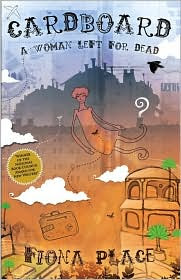 This is the first time I read a novel written both in prose and poetry. At first it had a disjointed feel to it but the more I read it the more I realized that it represented Lucinda's world—fragmented, broken and interrupted. I found this novel brilliant and powerful. At times it was so hard to read because it was a window into the mind of a young woman and her constant battle with anorexia, self-destructive behaviour, death, and the need to be loved. But it was also so compelling that at times I couldn't put it down.

Lucinda is a bright girl who is plagued with guilt and depression, sees herself as ugly and selfish, craves others' approval and yearns to be loved. As I began to read her story, I quickly realized it was unlike most novels. It read like a monologue (which took some time to get used to) with very little dialogue. I felt like I was in Lucinda's head, feeling her pain and experiencing her distorted view of life. She tells her story through flashbacks which sometimes was confusing. I also found it a little too long, especially since the topic was serious and affecting. It was heartbreaking to read how Lucinda had no sense of belonging, like she was suspended in the world all alone, with parents incapable and unwilling to love her.

Fiona Place's writing is lyrical and filled with meaning. I stopped several times to reread the  poetry and expressions so as to get the sense of what her character was living. Although the prose is written in 1st person, the poetry is written in 3rd. The poetry related Lucinda's fear, panic and pain in a way that came across differently from the prose alone.

The second half of the book had a different feel to it as Lucinda fights to break the self-destructive cycle. Her anger is more acute, there is more dialogue with lots of f-words. She deals with an unconventional psychiatrist who helps to shake her out of her bubble of pain and suicidal behaviour. The reader gets a chance to see her in a different light as she begins to accept herself as a woman and starts behaving as one. This shift in writing perfectly conveys the change in Lucinda as she embarks on her journey to recovery. Although sad, this story is hopeful and the ending satisfying.

Cardboard delves deep into the world of psychiatric care and the manipulative conduct both from the patients and staff. It was fascinating to read. If you enjoy literature that explores the psyche of women's behaviour when dealing with depression and emotional needs, you will not be disappointed with this book. It is an amazing journey.

Disclosure: Thank you to Fiona Place for sending me this book for review. I was not compensated in any other way, nor told how to rate or review this product.