A Ring of Truth by Michelle Cox (Book Review and Giveaway!) 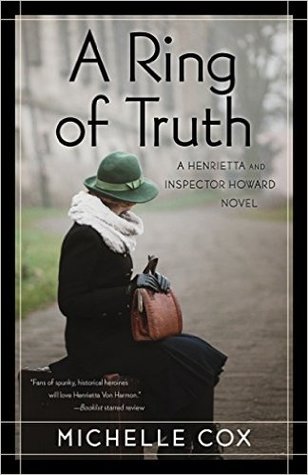 A Ring of Truth is the second book in the Henrietta and Inspector Howard series. And I enjoyed this one too!

As Clive and Henrietta attempt to discover the truth in the two very different worlds unraveling around them, they both begin to wonder: Are they meant for each other after all?

A Ring of Truth is the second book in the Henrietta and Inspector Howard series. The book description says this is a delightful rewrite of Pride and Prejudice but to me, it felt more like an episode from Downton Abbey or even Cinderella. And I'm saying this in a positive way.

Henrietta and Clive are now engaged to be married. Henrietta is introduced to Clive's wealthy family and discovers that her brooding Inspector is none other than the heir to a vast fortune and estate. If she is to be mistress of the Howard estate, Henrietta must be taught the ways of being part of high society. This proves to be harder than Henrietta expected, and she strays downstairs and befriends the servants which leads her to become entangled in a sinister plot.

There were some twists and turns as the mystery unraveled and came to a satisfying end. But there were plot threads that were left unresolved and made me eager to start reading the third book in the series A Promise Given.

Throughout the story, the author makes references to events from the first book. I liked this as it made them fresh in my mind once again and added to my enjoyment of the series. I'm now invested in these characters and want to read all five books!