An interview with Ronald L. Ruiz

On Wednesday I spotlighted Jesusita, a novel about immigrants—legal and illegal—trying to survive in California in the years after World War II.

Today, I have the pleasure of a short interview with talented author Ronald L. Ruiz, whose writing has been said to pull you into the lives of characters with personal and tragic struggles. Ruiz writes literary fiction that leaves you thinking far after the book has been read. Please help me welcome Mr. Ruiz to Library of Clean Reads.


LCR: You have written a memoir and several fiction novels. Which one was the hardest to write?


RLR: Happy Birthday Jesus was the hardest to write. I was writing and reacting to what I was seeing in the criminal justice system as a young lawyer: the endless cycle of poverty leading to criminality ending in the inhumanity of prison. HBJ was published in 1994.

About ten years ago the united States Supreme Court ordered California to release thousands of prisoners because of the living conditions in its prisons. Over the past two years Justice Kennedy of the United States Supreme court has been publicly saying that solitary confinement in prison can amount to cruel and unusual punishment. Two months ago California transferred more than two thousand inmates who were in solitary confinement, some for many years, into the general prison population. My protagonist in HBJ typified one of those inmates.

LCR: Your novels deal with personal struggle, and the reviews reflect how adept you are at getting the reader invested in your characters. What do you think contributes to this?

LCR: The book cover for Jesusita is unique. Is it based on an artist's work? 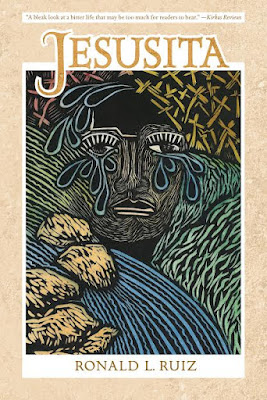 RLR: Yes, Hugo Anaya is an artist and a friend of mine. I told him about Jesusita and asked him to design a cover for it. He did and I liked it very much because I thought it fit perfectly.

LCR: Are you currently writing another novel? If so, can you tell us what it's about?

RLR: Just before Raymond finishes high school he has a breakdown and is diagnosed with a life long mental illness that can be controlled by medication. At loose ends his cousin, who is in a drug cartel, offers to pay him $100 a week to once a week move a large amount of money from point A to point B and hide it there for four weeks until someone calls for it.

The police arrest his cousin and look for Raymond who flees from them and the cartel with a huge amount of money. First to Los Angeles, then across Arizona and New Mexico to Dallas and then down to Laredo, Texas and into Mexico. What he sees and does and the people he meets on his journey will, I hope, be not only entertaining but of some social value.

LCR: Thank you, Ronald, for taking the time to answer my questions!

The author has graciously offered to give away 10 signed copies of his various books. Enter the giveaway today.