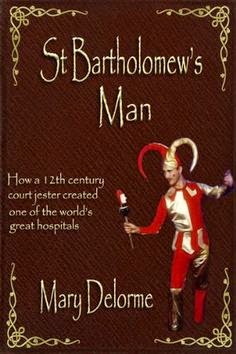 This historical fiction set in 12th century England follows the life of Rahere, court minstrel/jester and monk, who founded the famous hospital for the poor, The Royal Hospital of St Bartholomew in London. St Bart’s is the oldest hospital in Europe, founded in 1123, and the oldest in Britain that still occupies its original site.

The author transported me to medieval England as she describes the clothes, contemporary names like Ranulph and Leofric, monastic life, the Benedictine  monks’ care for the sick and poor, musical instruments – a psaltery is an ancient stringed musical instrument resembling a zither - and the archaic language.

I became fully absorbed in the surroundings and life at the time, cringing when I read of the oppressive rule of King William Rufus, breathing a sigh of relief when King Henry 1 succeeded him, and wondering how ordinary people survived the turmoil between Stephen and Maude for the throne. It’s obvious that the author has done her research and is fully engaged in life in medieval times.

I liked the character development. All of the main ones came through as real people, even though Rahere seemed too good to be true at times. I was reminded of how faith played an important role in daily life in earlier times. I liked the description of the healing methods used by the monks and the building methods of the time, marveling at the ingenuity, the human talent, of people who were able to produce such great buildings that have weathered time and events.

Disclosure: Thanks to Jon Delorme for sending me this book for review. I was not compensated in any other way, nor told how to rate or review this product