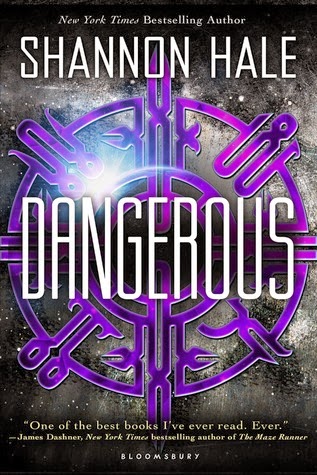 Shannon Hale is one very talented author. From middle grade fantasy to contemporary adult and now YA sci-fi, it seems Hale can write anything. I read this one with my daughter and we loved it. The wonderful thing about Hale’s writing is that it’s not formulaic. You never quite know what to expect from her except that you’re in for a good reading.

In Dangerous, Maisie Danger Brown is a smart homeschooled girl who wants to go to Astronaut Boot Camp. When she enters and wins the sweepstakes that get her to spend three weeks there she is thrilled. On her first day, she meets Jonathan Wilder, a charmer who’d attended five schools in the past three years. She wonders what he's hiding but she’s also intrigued when he isn't repulsed because she’s missing part of her left arm and wears a prosthesis.

The teens at boot camp are placed into teams and given missions to accomplish together. The winning team would get to go see the Beanstalk elevator, built to bring people up to the two space stations. But to the surprise of the winning team, Howell, the camp’s owner decides to take them on a quick jaunt up to the space station. Once there, the five members are shown five tokens, alien technology that changes their lives.

While Hale builds the characters in the first quarter of the book, the reader is almost unprepared when the action and danger is revved up and becomes non-stop. There are twists and turns throughout, and Maisie is constantly wondering who to trust. The dialogue is witty, there are funny moments, sad ones too, and the suspenseful plot builds beautifully. Only Hale can keep a reader grounded on the Earth while dealing with aliens and scientific jargon.

With quirky characters, a strong heroine, and an almost reformed lonely delinquent, Hale takes us on a ride with a mixed genre of action-adventure, sci-fi, romance and comic book superheros. I was continuously surprised as I turned the pages and equally delighted to be taken off guard several times. Maisie is a great main character and Wilder was perfectly unpredictable.

As a parent, I have to say I was so pleased by the relationship Maisie had with her parents. Even though this was very much YA, the message was still that parents matter--a lot--in a teen’s life. Hale scored double points with me because of this. And even though there are evil characters, she easily kept this book clean. No swearing. Actually she came up with a neat way of dealing with language.

Dangerous is sure to stand out this spring among the plethora of YA books, and for good reason. Shannon Hale is a master storyteller and I hope she continues to explore new genres.

Note: This book is rated V = mild comic book violence. There are fight scenes in this book but they are not bloody or too violent.