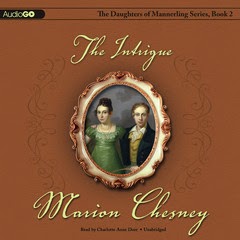 
This is the second book in the Regency romance series The Daughters of Mannerling. The first book is The Banishment. Now that Isabella is married and failed to secure Mannerling, it falls on the shoulders of the second eldest sister Jessica to get Mannerling, their former home that was gambled away by their father. It now belongs to new owners who have a marriageable son named Harry. The problem is that Harry is a drunkard and a scoundrel who wouldn't think twice about ravishing a young lady. Jessica has her reservations, especially after she meets Professor Robert Sommerville, Harry's level-headed cousin. But once again, her family is counting on her just like they did with Isabella.

Once again, I found this book similarly fun and delightful to listen to. The story continues, and Jessica, like her sister before her struggles between duty to her family and what her heart begins to tell her after she spends time with Robert at his estate. A new character in the form of Mrs. Trumble enters the picture as the governess to the girls. There is a mystery about her because we don't know where she is from and who she really is. But she cares for the girls more than their selfish mother Mrs. Beverley.

This book's narrator is different from the first. Charlotte Anne Dore does a good job narrating. She has a bit of a raspy voice that is livelier than Lizzie Stanton who narrated the first book. She does a great job with wise Mrs. Trumble's voice compared to snobbish Mrs. Beverley's voice and then sweet Jessica's voice, but I did not like her rendition of Robert's voice which was low and made him sound weak.

Apart from this, I enjoyed this second book in the series with its new characters. I look forward to the third book. I'm sure Chesney will be introducing other interesting characters and revealing more on Mrs. Trumble.

Note: This book is rated S = sexual content. There is a brief bedroom scene. Not too descriptive.