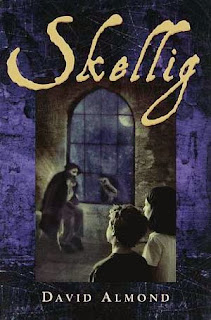 
I don't think I would have picked up this book if it weren't for the fact that it's on the list of books to read for the Battle of the Books competition in which my daughter is participating in her first year of high school. We read it together and although it kept us turning the pages to discover the mystery of who or what is Skellig, overall, we weren't wowed by it.

Michael and his family have just moved into an old dilapidated house. His baby sister is ill and he is unsure if she will die. There is tension in their family and Michael copes with these new changes by spending time with the strange man he discovered named Skellig, who looks like a sick hobo lying in the condemned garage that is off limits because it will collapse any day. He shares his secret friendship with Skellig only with Mina, a homeschooled girl who lives in his new neighborhood. Together they help Skellig and are fascinated by this fantastical creature who is like an owl-man.

From the beginning, it's clear that Michael is hurting. My daughter and I could relate to his situation and felt for him. When we first meet Skellig, we were not impressed with him, rather he was somewhat disgusting. He changes for the better in the way we view him as the story progresses however, but we never quite understood who he was and how he ended up sick in that garage. His conversations with Michael are short, uninspiring and do not reveal much about him.

The author's allusions to mankind's evolution mixed in with angelic-like interventions were contradictory and failed to touch us as I think it was meant to. We chose to see it more as an allegory of how imagination and creative play can help in coping with stressful situations in life. This was supported by the fact that Michael's baby sister was never given a name and referred to simply as the baby. Mina, who was different from Micheal's guy friends, helped Michael nurture that magical feeling of discovery.

This was a different kind of book, one that was interesting to read but was just an okay read for us.

Disclosure: We borrowed this book from the library. We were not compensated in any other way, nor told how to rate or review this product.