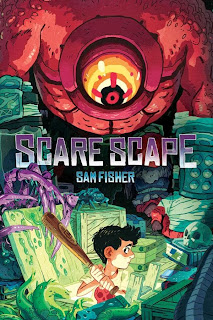 Morgan, his two siblings (a brother and teen sister) and their father move into an immense old house that is falling apart. Right from the beginning we could see how the kids miss their mom who has died and are still grieving. Morgan loves the house, especially after finding out it once belonged to the man who wrote the stories in Scare Scape, a comic series featuring horrible monsters that Morgan collects and loves to read.

Soon after, Morgan finds a gargoyle buried in his yard with a message on it stating they can each make a wish. Morgan and his siblings each make a wish and soon they find that what they wished for is linked to dark magic and therefore horrific things start happening.

Sam Fisher is a great writer. This book was very suspenseful and kept me and my son in anticipation. It also creeped us out. But more on that later. Fisher's portrayal of the three siblings and their relationship to each other was right on. No surprise there since he's a father of three kids. My son and I chuckled at some of the scenes between them because it made us think of the squabbles between my son and his sister.

We liked how, despite their differences, the siblings worked together to get themselves out of their predicament. And in the end it solidified their bond. The characters are flawed but likable and Morgan was a kid my son could relate to. Despite all this, this book had some gruesome scenes in it, and my son was scared to sleep alone in his room at night. I have to admit to skipping through some scenes for this reason. Also, we don't read books that includes black magic and this made us uncomfortable, although the story's message is clear that black magic is bad and should not be fooled around with.

The book includes a fully illustrated Monster Deck (a description of each of the monster creatures) which we only skimmed. Some were actually cool creatures with the ability to do extraordinary things but others were just plain demonic and we skipped them. My son and I are not a fan of horror, and although we liked the story, the suspense, and the way the author wrote, we certainly did not like the paranormal elements. And we don't encourage toys, books or games that feature the occult or demonic as entertaining.

Disclosure: Thanks to Scholastic for sending us this book for review. We were not compensated in any other way, nor told how to rate or review this product.