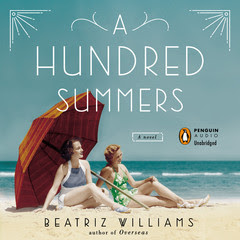 
After reading the synopsis I knew I wanted to read this book even though I didn't know what to expect since, Overseas, the first book by this author had been a little disappointing to me. Well, the author has redeemed herself in my eyes because I really liked this one! It was a perfect summer read. I listening to the audio version and was hooked from the beginning. More on the fantastic narration later.

The story opens in 1938, when New York socialite Lily Dane returns with her mother and six year-old sister Kiki to the familiar community of Seaview, Rhode Island. It's a place Lily has been coming to since childhood and it was her refuge after her heartbreak in 1931 with Nick Greenwald. But this summer, Nick shows up with his new wife, Budgie, who had been Lily's best friend since childhood. They are restoring Budgie's family's old house. The Seaview community do not welcome Nick and Budgie because of what happened in the past. A past that we slowly discover as the story alternates between 1931, when Lily and Nick met and fell in love, to the present 1938, as the true story of Nick and Budgie's marriage unfolds.

I have to say that Beatriz Williams has the talent for weaving alternating stories from the past to the present so that the reader is trying to figure it all out as the clues unfold the story before us. I love this technique because it built suspense, mystery and questions in my mind even as I enjoyed the plot and character developments. The love story between Lily and Nick was beautiful. Both Lily and Nick have big hearts and there are those that took advantage of that. Specifically Budgie and Graham. Budgie was sensually charming and, oh so manipulative! I wanted to strangle her throughout the story. Williams does know how to build interesting and unforgettable characters!

Kathleen McInerney's narration was absolutely wonderful. She captured the intimacy, passion and intensity of the story and of Lily Dane who tells the story in the first person point-of-view. She skillfully brought to life Lily, in essence becoming her. And her voice perfectly changed pitch and tone for the manipulative Budgie, the cute little Kiki, the daring older aunt and, of course, Nick. I have now added McInerney to my list of great narrators.

I loved the setting of 1930s, the oceanfront community, and the old-fashioned chivalry that Williams assigns to the heroic male main characters in her novels. Romance lovers will devour this one up, I'm sure.

Note: This book is rated P = Profanity and S = Sexual content. While William's last book was riddled with f-words, this book only had a few. There are many religious expletives however. There are explicit sex scenes in this book, one of which I would have preferred had much less details.

Disclosure: Thanks to Penguin and Audiobook Jukebox for sending me this audiobook for review. I was not compensated in any other way, nor told how to rate or review this product.