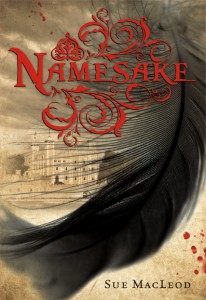 
When Jane Grey returns from the library after doing research on the topic of her history paper, Lady Jane Grey, her namesake, she discovers a tiny book called the Booke of Prayre in among her library books. When she reads a passage aloud from the book, she is transported back in time to the Tower of London where Lady Jane Grey, the teenaged girl who ruled Tudor England for nine days, is being held prisoner and is to be executed for treason. They strike a friendship, and Jane slips back in time more often to escape dealing with her mother's drinking problem and the fact that she and her best friend are no longer close.

My daughter and I both enjoyed this novel. We liked the time travel concept and the way both the lives of the two Janes were affected by each other without anyone else knowing. MacLeod was able to create two very different worlds, Tudor England as seen through modern Jane's eyes and also high school life with teenage dynamics and angst. This book introduced my daughter to the harsh realities of the 16th century with its bloody beheadings, and also dealt with the serious topic of an alcoholic parent. MacLeod succeeded in realistically capturing the voice of a teenager dealing with this issue and life in general.

My daughter thought the beginning had a slow start and wished there was more of an explanation as to how and why the prayer book was in Jane's bag in the first place. She also would have wanted the book to continue so she could know what else happened in the modern Jane's life, which shows she was invested in the character and her story. I wasn't crazy about the author's writing, though. For me. The story felt disjointed. At times. Perhaps this was due. To the over abundance. Of cut-off sentences. Know what I mean?

Both my daughter and I love the cover of this book. We recommend Namesake to lovers of YA drama fiction and time travel.

Note: This book is rated P = Profanity for crude words such as sh*t and b*tch, and V = violence for some gruesome descriptions of beheadings.
I will count this book towards my Personal Time Travel Reading Challenge.

Disclosure: Thanks to Pajama Press for sending us this book for review. We were not compensated in any other way, nor told how to rate or review this product.