Charlotte and Emily: A Novel of the Brontës by Jude Morgan 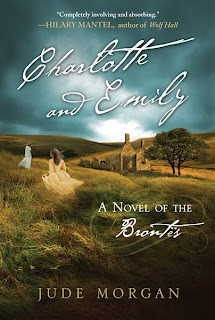 This is my second review of a book about the famous Brontë family in recent weeks. Something about their story alternately attracts and repels me.

The story opens with a dreary deathbed scene that pretty much sets the tone for the book. The story, by the way, is not just about Charlotte and Emily, but rather includes the whole family. The children, of whom there were six, were highly imaginative. They wrote and bound miniature books of their imaginary exploits. But what else is there to do “in a remote and primitive spot”, says father Patrick.

The narrator says that these miniature books “create, constitute, and delimit a world that is self-sufficient.” And that I believe, explains their ability to live such limited, sparse lives – they were a world unto themselves – “we three” - Charlotte, Emily, and Anne, following the death of their two older sisters and their brother Branwell’s descent into alcoholism and drug addiction. Who could blame them for becoming irritatingly introspective on seeing their family gradually disappear? In reference to her siblings Charlotte thinks “only they understood, only they were capable of understanding; it was as if you were a little knot of islanders who spoke a language unknown to anyone else on the globe, and untranslatable.”

The author writes in a style reminiscent of Jane Eyre in evoking a time and place long since gone. Snide comments about the clergy corresponds to Charlotte’s description of the founder of Lowood School that Jane Eyre attended. Jude Morgan deftly describes English village life in the early 1800s. I enjoyed the author’s rich descriptions of situations, i.e., “it was as if silence was nakedness, and every moment must, for decency’s sake, be verbally clothed.” This is in reference to a character in the book who talks non-stop.

This is a novel that reads like a biography. Obviously, the author has done extensive research to “capture” the respective personalities of the Brontës. They were extremely complex individuals, to say the least. Charlotte was the most determined of the three sisters to make a name for herself as an author. And only Charlotte succeeded in having a measure of happiness during her one year of marriage, for she, too, died an early death in childbirth. Patrick Brontë, the father, outlived his wife and all of his children.

This is a book sure to please readers who enjoy biographies, the Brontës, and a story very well written.

Note: This book is rated P = profanity for expletives and f-bombs.