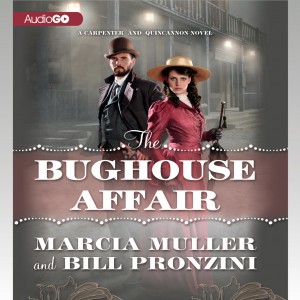 I enjoyed this first book of a new series of “lighthearted historical mysteries set in 1890s San Francisco”. It was rich with period details (a little too much at times), especially of the Barbary Coast, which was a red-light district known for gambling, prostitution and crime. Former Pinkerton operative Sabina Carpenter and ex-Secret Service agent John Quincannon, own a detective agency and have been working together for three years now. In this story, Sabina is hired to find the woman who pickpockets at an Amusement Park and Quincannon is hired to investigate a series of house burglaries. Sherlock Holmes makes an appearance as the two detectives narrow down their searches that lead to a related case.

Both Quincannon and Sabina are great characters, but Quincannon was my favorite. He is hot-tempered, impulsive and a man of action. He's fearless as he navigates the dangerous streets of old San Francisco. He's also starting to pine after Sabina, wishing their relationship would take a more romantic turn, but Sabina keeps things professional. She's a widow who still misses her husband. She's calm, cool and collected. She's also empathetic and kind. Both are smart, observant and good detectives, but Quincannon had me cracking up when his feathers got ruffled by Sherlock Holmes. He is also quite humorous in his description of people and situations. He is proud, opinionated and independent, and I thought his flaws made him a great character.

This audiobook has two narrators who alternate as do the point-of-views of the two main characters. I really enjoyed Sullivan's narration as it suited the character of John Quincannon. His deep timbre captured well Quincannon's confidence and his sarcasm toward those who meddled into his investigations. He did an excellent rendition of Sherlock Holmes, nailing not only the English accent but the personality behind it. Sullivan was able to easily change tones between character voices and accents.

Meredith Mitchell's narration was okay. She has a pleasant voice that did suit the more serious Sabina, but at times it was too monotone for me. She wasn't as skilled as Sullivan in changing accents from one character to the next.

The Bughouse Affair was a good mystery with some smart sleuthing work. It had a bit of a slow start, (probably to set the stage for the series) but picked up momentum when Sherlock Holmes made an appearance and--much to Quincannon's frustration--ended up assisting in solving the case. I would be interested in reading more of this new series. Oh, and I love that cover. It portrays the two main characters very well.

Note: This book is rated P for a few religious expletives and some crude language.

Disclosure: Thanks to Jill Ovren from AudioGo and to Audiobook Jukebox for sending me this audiobook for review. I was not compensated in any other way, nor told how to rate or review this product.