Rally 'Round the Corpse: An Abel Adventures Mystery by Hy Conrad 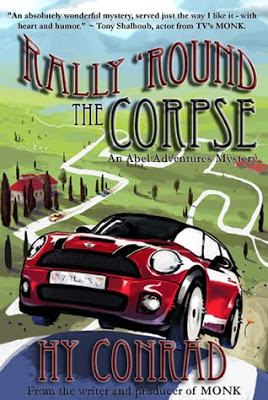 I thoroughly enjoyed this don’t-take-yourself-too-seriously murder mystery. It’s a light, witty novel with just the right amount of humor.

Amy and her mother, Fanny, run a travel agency specializing in adventures. The Monte Carlo to Rome Mystery Road Rally is a travel adventure/murder mystery game offered to well-heeled tourists, “people pampering themselves to the tune of two weeks and many thousands of dollars”. Actors provide clues to the mystery that the vacationers use to solve the puzzle (it reminded me a bit of The Amazing Race).

It’s all great fun until the eccentric creator of the puzzle, the only one who knows the solution to the game, is murdered. “Murder most foul” takes place a second time – Georgina who is both a traveler and a key player in the story is found dead. Amy gradually realizes that the fictional mystery game is based on an actual unsolved murder! As in all murder mysteries, the guilty finger points to a variety of culprits. The reader is completely surprised when the real murderer is revealed. Throw in a love angle and the reader is set for an engaging read.

There are some funny descriptions, such as. “her lilac perfume seemed strong enough to stir the flag into a flutter”; “Amy thought of her double bottom drawer as a black hole, sucking in anything and everything….it was an informal storage system, but it filled the gap between the formality of her files and the abyss of the wastebasket.” An NYPD cop who is also a traveler says things like, “what the Hector?” instead of the usual expletive.

This quick-read novel is an excellent choice for mystery fans!

Note: This book is rated P (mild) for a few mild expletives.

Disclosure: Thanks to Hy Conrad for sending me this book for review. I was not compensated in any other way, nor told how to rate or review this product.