The Maid of Fairbourne Hall by Julie Klassen 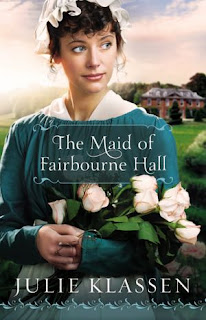 
This is the second book I read by Julie Klassen, and just as in the first book The Silent Governess, I thoroughly enjoyed this historical fiction story.

When Margaret Macy's stepfather wants to marry her off to his nephew so that her inheritance--due on her twenty-fifth birthday only three months away--would be within reach of his greedy hands, she flees disguised as a housemaid. She never really planned on working as a servant but ends up doing just that and in the home of her former suitor and admirer Nathaniel Upchurch. As her stepfather's search closes in and she struggles to keep her identity from the master of the house, Margaret learns a great deal from her life as a lady to one of a housemaid.

Klassen weaves a great story, especially because our main character gets to experience the belowstairs world of a 19th-century English manor. It's gruelling work. I cringed when she had to enter the rooms of the male family members in the early morning to empty out “the slops” of their chamber pot, pick up their discarded clothes and light the fire in the grate. Only a determined and impulsive young woman like Margaret put up with and learned from her servitude as she waited to claim her inheritance and thus be free from her stepfather's constraints to marry a man she did not love or want.

Klassen builds the story well, and we get to appreciate the characters as they grow and change. Klassen brings alive the world of upstairs, downstairs and she writes confidently of that era with knowledge. I particularly liked and appreciated the quotes at the beginning of every chapter taken from the literature of that time. It precluded what the chapter would reveal, and I sometimes found myself going back to the quote after I read the chapter and smiling at the application.

Although considered Christian fiction, this book will appeal to any who enjoys a clean but well-written and character-driven novel. I continue to be a fan of this wonderful storyteller.

Note: This book is rated C = clean read.
I will count this book toward the following challenges: What's in a Name Challenge