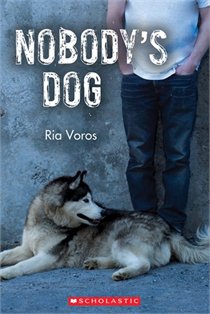 My daughter and I really enjoyed reading this book about thirteen-year-old Jakob Nebedy, a lonely teen who only a few months ago was in a car crash that killed his parents. He doesn't remember much from that night, but is haunted by dreams of his parents and that fateful incident. It's summer and Jakob lives with his aunt. Both are grieving and don't know how to deal with their grief. One night, a stray husky dog befriends Jakob, and from then on, Jakob spends his nights roaming the streets together with Chilko, the dog. Through his adventures with Chilko, Jakob discovers what really happened the night of the accident, finds friendship in unlikely places, and learns to move on with his life.

Ria Voros captures the voice of a young male teen well. The book is written from his point-of-view, and to a certain extend my daughter could relate to him. There were funny moments in this novel that eased the sadness regarding Jakob's situation. My daughter and I wanted to know what happened the night of the accident, and if Jakob and his aunt would come to terms with the death of their loved ones. We journeyed with Jakob as he tried to come to terms with his losses.

Jakob's neighbours, Soleil and her twelve-year-old daughter Libby, who lived in the basement of his home, spiced up the story with their personalities. Libby was a girl who loved to draw, was forthright and sometimes weird, but she grows on you and eventually she grew on Jakob who came to see her as a friend. Chilko was another great character, revealing Jakob to us through their friendship. He personified what Jakob was feeling, lost and bereft in the world.

Although emotional, the author finds the right balance, writing with sensitivity and honesty, keeping the story moving and easy to read. This was a refreshing story, and I think surprising for my daughter who wasn't sure she would like it. We look forward to reading more from this new Canadian voice.

Note to the publisher: My daughter and I liked the ARC book cover better than this one. The stance of the boy in the ARC is one of a young teen, whereas the one in this cover looks like that of an older teen with what looks like a beer belly??


Note: This book is rated C = clean read.  A few religious expletives such as "Oh my G*d!")