Posted by Laura at Library of Clean Reads on October 26, 2012 in Audio books Dystopian Gabrielle Zevin YA audio books YA Book Reviews | Comments : 0 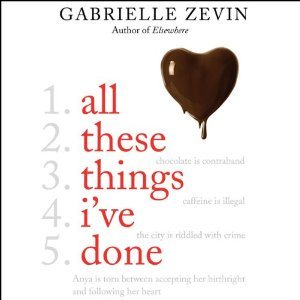 
I was hooked the moment I began to listen to this audio. Zevin creates a story that pulls you right into Anya's world and doesn't let go until the final words.

Sixteen year-old Anya Balanchine lives in New York City, not the city of our day, but a futuristic NY where chocolate and coffee are illegal, paper books are no longer printed and water is rationed. It's a city ripe with crime, where curfew is enforced and where Anya lives with her bed-bound and dying grandmother, Galina, and her two siblings who she takes care of--her sweet twelve year-old sister and her nineteen year-old brother whose head injury as a child has left him more of a child than a man.

Anya's family are producers of chocolate and when it becomes illegal her father becomes a crime boss and he is eventually murdered. Throughout the telling of her story, Anya refers to her father with admiration telling of the things he taught her as a child growing up. She is a strong and smart character and gains strength from what she remembers of her deceased parents. Her grandmother too is a strong woman dispensing advice even as she is becoming more frail. I enjoyed their interactions.

Anya meets Win at school. He is the new assistant DA's son and someone she would rather avoid, but gradually finds herself falling for him. The story heats up as someone close to Anya gets poisoned by the same chocolate her family's company produces and she gets blamed for it. The suspense builds and I wondered how Anya would deal with having to face this terrible accusation, as well as the realization of who she is that would lead her to either accept her birthright or reject it, and the prospect of having to possibly give up the boy she loved. The book explores various themes; family ties, which was very strong and to which I could easily relate, following your heart and accepting the sacrifices that go with it; loyalty--to who you are, to your beliefs and to your friends and family.

The narrator captured Anya and the feel of this story well. Initially I thought her voice too old for a sixteen year-old, but as I got to know Anya better, I realized Anya was older than her years (because of her caregiving responsibilities) and was telling the story like it had all happened in the past. The narrator was able to capture the raspy and accented old voice of the grandmother so well, and change the inflection to suit the joyous one of the young sister or the naive one of Anya's brother.

This was an absorbing story and I am now going to look into Zevin's other novels. It was also refreshingly different from other YA dystopian novels in that adults are very prevalent throughout, and it did not contain violence, sex or any profanity.

Note: This book is rated C = clean read.
I will count this audio book toward the following challenge: Dystopian Reading Challenge

Disclosure:  This audio is a personal copy that I won from Devourer of Books. I was not compensated in any other way, nor told how to rate or review this product.