To Defy a King by Elizabeth Chadwick 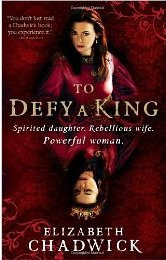 To Defy a King is the story of Mahelt Marshal, the oldest and beloved daughter of William Marshal, a dominant player in the political intrigues of 13th century England.

The account begins in 1204. Cruel King John, brother of Richard the Lionheart of Robin Hood fame sits on the throne. At the Marshal family home in Berkshire, eleven-year-old, high-spirited Mahelt is told that she is to be betrothed to 21-year-old Hugh Bigod, the son of the Earl of Norfolk, a rich and powerful man. Daughters were valuable because they could be used to make important alliances and Mahelt agrees to fulfill her role. Mahelt remains with her family until “she is of an age for successful child-bearing.” (Do I hear feminists voicing their collective angst?) She marries Hugh about 3 years later and produces their first son in 1209. Ever independently-minded, she refuses to be a brood mare and gives birth every 2 or 3 years. Yes, even in the 1200’s savvy women exist!

The author did an amazing job of bringing Mahelt to life. The reader watches her grow from a young, untried tomboy frolicking with her brothers to a capable woman. She manages the castle of her marital family when the chatelaine of it dies. In the context of those times it represents a lot of hard work, from cheese-making to brewing the daily ale to sheep-raising and, of course, the inevitable “women’s work” – embroidery.

A sinister portrait is drawn of King John. Slaughter and bloodshed are rife in the 13th century and King John sets the tone. His threats and predatory intimidation of women, including his own sister-in-law, are clearly reported. Mahelt dislikes and distrusts the King. Despite threats to her family she vehemently defies him when he attempts to seduce her. Although he knows that she is the daughter of his most prominent knight and supporter, his tactics are designed to flex his power over her and her family. His despotism erupts in his wanton slaughter of 20 Welsh prisoners, including a small boy. Mahelt’s own sister-in-law and her baby are murdered by John’s assassins in the family home. Noble knights and barons are disgusted at his behavior and set out to create a charter of rights to control the King – the eventual Magna Carta. However, Mahelt’s own father has sworn loyalty to the King and as an honourable man refuses to act against him. Family loyalty is put to the test.

King John dies suddenly. A new young king is on the throne, supported by the regent, William Marshal, and the country is freed of tyranny for the moment. Mahelt has borne her third son, is reconciled with her husband and the future looks rosy.

This is an excellent book for lovers of historical fiction, 13-th century England, and strong women.

Note: There are several explicit sexual scenes between Hugh and Mahelt.