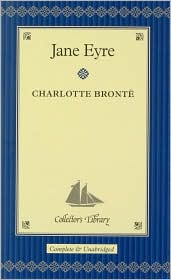 Jane Eyre by Charlotte Bronte (Collector's Library Series)
(Rated: C)
Sterling Publishing
ISBN:  978-0760748640
Published Sept 2003
Hardcover, 650 pages
The first time I read Jane Eyre I was a wide-eyed youngster who didn't quite understand Jane's passion and love for Mr. Rochester. Re-reading it years later with *ahem* more experience and maturity in life, I was able to better appreciate the depth of these two characters.
What I thoroughly enjoyed about this classic tale was the very personalities of these characters. Jane and Mr. Rochester are such unlikely heroes that the story begs to be read and explored. She is poor and plain-looking and he is harsh and ugly. However, Jane has an unwavering spirit, a quickness of mind and a resoluteness in standing up for what is right even at great cost, and Mr. Rochester's personality is better understood as we become privy of his horrid circumstances and we sympathize with what he suffers because of them.
I read the complete and unabridged version, and mid-way I found some of the scenes long. However, Bronte's writing is a joy to read, with her grasp of the English language, her symbolism and her metaphors. I had to look up several words in the dictionary. There are also several Biblical references, common and uncommon, throughout her writing, and unless the modern reader has read the Bible, they will miss their meaning entirely. For example, toward the end of the story, Jane refers to Mr. Rochester as having a “'faux air' of Nebuchadnezzar in the fields about you”, which so well depicted the transformation he undergoes.
I couldn't help but notice that Bronte creatively used the elements of fantasy in her writing as Jane was often called elf and faery by Mr. Rochester. She also used Gothic and supernatural elements that were subtle but very present and added a foreboding tone to the story. The ending is so satisfactory and meaningful, though, that it brought tears to my eyes.
Unlike her heroine, Charlotte Bronte married at the age of 38 in 1854 (7 years after the publication of Jane Eyre) only to die a year later in 1855. This ending left me sad.
I will count this book toward the following challenges: TwentyEleven Challenge and the Historical Fiction Challenge

Disclosure: I got this book through BookMooch and was not told how to rate or review it.