The Rocket by Mike Leonetti and illustrated by Greg Banning 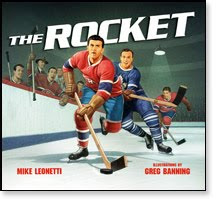 Publisher's Synopsis:
Andre loves to play hockey, but he’s tired of hearing how he’ll never be as good as his older brother. One thing Andre and his brother share, though, is a love of the Montreal Canadiens. And the team’s new star, Maurice “Rocket” Richard, is giving the fans lots to cheer about. When the Canadiens make it to the playoffs, Andre’s father is lucky enough to get tickets. And it is there, at the Forum, in an historic, action-packed game that Andre discovers something that changes the way he looks at hockey, his brother and his family.

My review:
If you or your child is a hockey fan, this book is the perfect story to introduce your child to Maurice Richard, known as The Rocket, whose face graces every hockey arena in Montreal. But whether you like hockey or not, this book is a heart-warming story about sibling relationships and their shared love of hockey.

I loved the fact that the setting is in Montreal (my city) in the 1940’s, with beautiful illustrations reminiscent of Norman Rockwell and similar to Bagram Ibatoulline. They brought back nostalgic memories of The Forum, home of the Montreal Canadiens from 1926 to 1996 and to 24 Stanley Cup championships. It has since been converted into a downtown entertainment center replete with a multiplex theatre, shops and restaurants.

Both my five year-old son and eight year-old daughter who take skating lessons, enjoyed this story and the illustrations that depicted an era when hockey players wore no helmets and children played hockey tournaments on the Back River. Leonetti has succeeded in bringing us a story that teaches simple family values through a sport loved by most North Americans.

Disclosure: Thanks to Nikole from Scholastic Canada for sending us this book for review. I was not compensated in any other way, nor told how to rate or review this product.