On The Night of the Seventh Moon by Victoria Holt

Posted by Laura at Library of Clean Reads on May 20, 2009 in Adult Book Reviews Fiction Gothic Romance | Comments : 0 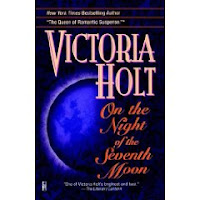 On The Night of The Seventh Moon by Victoria Holt (Rated: C)

I picked up an old copy of this book for $0.25 the other day when I dropped off some items at my local donation centre. The pages were yellowed and the writing small but the topic intrigued me. It's been many years since I last read Victoria Holt, an author known as "the supreme writer of the 'gothic' romance".

The story is told from Helena Trant, the heroine's point of view as she recaps her past, a past shrouded in mystery as she tries to uncover exactly what happened to her on the night of the seventh moon —when a festival celebration of mischief took place. She is rescued by a handsome stranger with whom she strongly believes to have fallen in love and subsequently married, only to wake up to a psychological nightmare of being told it had been all a dream and none of it had happened.

The mystery deepens as we speed through the pages to uncover what really happened. Some of it is predictable, but the plot is well laid out and we are continuously kept guessing regarding the different characters as to whether they are truly Helena's friend or her enemy. Although the heroine's character is well developed, I found the hero's was not. I should have liked their relationship to have been explored a little more.

However, if you are looking for a good gothic romance this book delivers.