Once again, Cambron transports us to an unforgettable time in WWII history, this time through the fashion and art world.

Based on true accounts of how Parisiennes resisted the Nazi occupation in World War II—from fashion houses to the city streets—comes a story of two courageous women who risked everything to fight an evil they couldn’t abide.

Paris, 1939. Maison Chanel has closed, thrusting haute couture dressmaker Lila de Laurent out of the world of high fashion as Nazi soldiers invade the streets and the City of Lights slips into darkness. Lila’s life is now a series of rations, brutal restrictions, and carefully controlled propaganda while Paris is cut off from the rest of the world. Yet in hidden corners of the city, the faithful pledge to resist. Lila is drawn to La Resistance and is soon using her skills as a dressmaker to infiltrate the Nazi elite. She takes their measurements and designs masterpieces, all while collecting secrets in the glamorous Hôtel Ritz—the heart of the Nazis’ Parisian headquarters. But when dashing René Touliard suddenly reenters her world, Lila finds her heart tangled between the determination to help save his Jewish family and bolstering the fight for liberation.

Paris, 1943. Sandrine Paquet’s job is to catalog the priceless works of art bound for the Führer’s Berlin, masterpieces stolen from prominent Jewish families. But behind closed doors, she secretly forages for information from the underground resistance. Beneath her compliant façade lies a woman bent on uncovering the fate of her missing husband . . . but at what cost? As Hitler’s regime crumbles, Sandrine is drawn in deeper when she uncrates an exquisite blush Chanel gown concealing a cryptic message that may reveal the fate of a dressmaker who vanished from within the fashion elite.

Told across the span of the Nazi occupation, The Paris Dressmaker highlights the brave women who used everything in their power to resist darkness and restore light to their world.
My Review:
Reviewed by Laura Fabiani
I have read three previous books by Kristy Cambron so I was excited about her latest release The Paris Dressmaker. Once again, Cambron transports us to an unforgettable time in WWII history, this time through the fashion and art world.
The story is about two brave women who use their work positions to get information for the resistance. Lila de Laurent is an haute couture dressmaker and Sandrine Pacquet works with an art historian cataloging art confiscated by the Germans. The story follows the lives of these two women during the four-year occupation in Paris. I enjoyed both of these women's stories that gave us a glimpse of what it must have been like living in Paris during those difficult war years and how some women chose to collaborate with the Germans while others courageously smuggled information to the underground resistance.

I usually love dual timeline stories, however, in this case, I did find it slowed the pace of the story. The reason is that there was a dual timeline for both women, so it became confusing sometimes to remember where the story left off for that particular character. The novel has a strong beginning with Lila de Laurent running for her life in the Meudon Forest as she is hunted by the Nazis. Then it switches to Sandrine's story. Then it switches back to Lila's story but to a previous timeline. The chapters had cliffhanger endings but it was a while before we would get back to it and this was at times frustrating. I think, in this case, this story would have been better told with one timeline and the use of well-placed flashbacks.

Also, I was waiting for the connection between the two women but it was minor and did not converge as I had hoped. That beautiful Chanel gown that is on the front cover concealing a cryptic message ended up being an anticlimactic plot for me.
However, I appreciated the research the author did and how she based some parts of her story on true accounts. I found Sandrine's story more heartbreaking and relatable to me since she was married and a mother. She was forced into certain situations and had to make the most of it, and she did so stoically. I found she had inner strength and poise.
The Paris Dressmaker was a good read but I did like her Hidden Masterpiece books better.
Buy the Book:
AMAZON | BARNES AND NOBLE | INDIEBOUND | KOBO
Add to GOODREADS
About the Author: 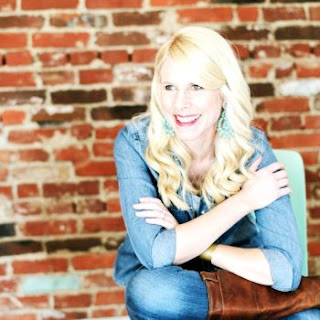 Kristy Cambron is an award-winning author of historical fiction, including her bestselling debut The Butterfly and the Violin, and an author of nonfiction, including the Verse Mapping Series Bibles and Bible studies. Kristy’s work has been named to Publishers Weekly Religion & Spirituality TOP 10, Library Journal Reviews’ Best Books, RT Reviewers’ Choice Awards, received 2015 & 2017 INSPY Award nominations, and has been featured at CBN, Lifeway Women, Jesus Calling, Country Woman Magazine, MICI Magazine, Faithwire, Declare, (in)Courage, and Bible Gateway. She holds a degree in Art History/Research Writing and lives in Indiana with her husband and three sons, where she can probably be bribed with a peppermint mocha latte and a good read.