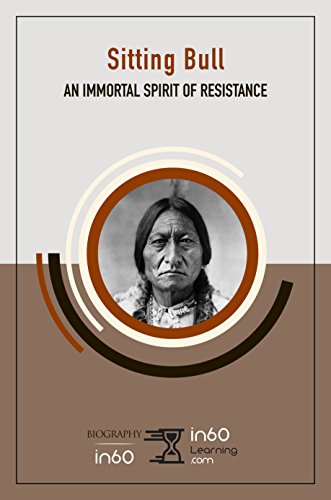 Learn about an amazing Native American in 60 minutes

Sitting Bull lives on in legacy as a Native American chief who fought against white oppression. When the U.S. government broke land treaties to seek gold in the Black Hills, Sitting Bull took a stand against the desecration of this sacred land. He led his people, the Hunkpapa Lakota, through a period of resistance amidst crisis. He persisted through the end of the Great Sioux Wars, famously facing off against George Armstrong Custer in the 1876 Battle of the Little Bighorn. Though shot and killed in 1890, Sitting Bull’s immortal spirit of resistance continues to inspire oppressed groups to this day.
My Review:
Reviewed by Sandra Olshaski

This is a biography that enables the reader to learn the essential details of its larger-than-life subject in just 60 minutes.

Sitting Bull was an important figure in the 19th century, respected both by his own people as well as in white popular culture. Because he led his people through a very grave time he will be an immortal figure in American history.

Who knew that Sitting Bull liked to sing? I learned that in this book. Also, Sitting Bull became a celebrity as he was closely involved with Annie Oakley, whom he thought of as an adopted daughter, and Bill Cody's "Wild West Show." They toured the United States and even traveled into Montreal where they posed for pictures together, the only known photos of Cody and sitting Bull together. During the last year of Sitting Bull's life he was accompanied by a Swiss immigrant woman who became his champion and personal secretary.

I particularly enjoyed the chapter on the Dakota, a word meaning friend or ally. Sitting Bull's people came from a division or tribe of the Dakota called the Hunkpapa Lakota. Lakota life was centered on extended families. Children were taught to trust other people, to value belonging to a community and to live in harmony. The Lakota worked together to achieve common goals. Strength and bravery were highly valued as were humility, honor, love, compassion, generosity, and wisdom. Their nomadic way of life came to an end by 1861 when most Lakota were living on reservations. It breaks my heart to think of 153 Lakota people being massacred at Wounded Knee on the Pine Ridge Reservation in 1890, three weeks after Sitting Bull was murdered. A hundred years later the United States Postal Service recognized Sitting Bull as a "Great American" and placed him on a 28-cent stamp.

There is a wealth of information to learn about this amazing man in just 60 short minutes. I highly recommend this excellent biography.

Sandra Olshaski's disclosure: Thanks to Tyler from from in60Learning for sending me this book for review. I was not compensated in any other way, nor told how to rate or review this product.

Get smarter in just 60 minutes with in60Learning. Concise and elegantly written non-fiction books and audiobooks help you learn the core subject matter in 20% of the time that it takes to read a typical book. Life is short, so explore a multitude of fascinating historical, biographical, scientific, political, and financial topics in only an hour each. Visit in60Learning.com