With Ballet in My Soul: Adventures of a Globetrotting Impresario by Eva Maze (Review) 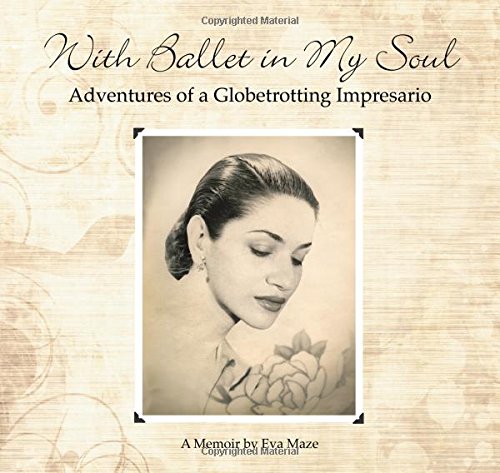 A life spanning close to 100 years is noteworthy, if only because of its longevity. The rich life of a woman committed to a professional vision ahead of its time, is truly remarkable. This is the story of such a woman.

A life spanning close to 100 years is noteworthy, if only because of its longevity. The rich life of a woman committed to a professional vision ahead of its time, filled with glamour, excitement and adventure, is truly remarkable. Narrated in her own words, this is the story of such a woman, Eva Maze, who, from the time she left Romania as a teenager in 1939, dreamed of being a ballet dancer, and through a series a circumstances, became instead one of the most successful theatrical impresarios in Europe – with a career spanning more than 40 years.

Now in her nineties, Maze looks back at the path and passion that led her from Bucharest to the United States as an immigrant, and then, as a married woman, back again to Europe and Asia, where she found her professional calling.

Set against key historical events of the 20th century, including the building of the Berlin Wall, the massacre at the 1972 Munich Olympic Games, as well as the rise and fall of Pan American Airlines, Maze’s fascinating past is brought to life through a combination of serious commentary and amusing anecdotes about the risks and rewards of the business side of theater and dance, some of the personalities who were part of those worlds from the 1940s to the 1990s, her own motivation for being an impresario, and her personal life. Her narration is supported by more than 250 captivating historical and modern images going back to her birth in 1922.

Representing artists and companies abroad from a vast array of talent in the performing arts of the time – including The Alvin Ailey Dance Company, The Living Theatre, and The Swingle Singers – this unique woman became a prolific producer of close to 100 different types of theatrical programs from the world of dance, music, mime, cabaret, and drama.

I thoroughly enjoyed this beautiful, 200-page coffee-table book that follows the exciting life of Eva Maze. Although she desired a ballet career, she found her real calling managing and touring talented dancers and artists, as an international impresario, at a time when it was dominated by men. She produced about 100 theatrical programs in various parts of the world, while moving with her husband from one country to another as he was transferred by Pan Am Airlines. A considerable feat for anyone and made even more so by also having two young children in tow.

This well-written memoir narrated by the author, as well as 250 historical and modern images brings to life Eva Maze's amazingly vibrant life (she's in her 90's) and career that spans the globe from Romania to India, to Germany to her beloved Paris, to name a few. How many people can say "so here we were on the dance floor in India, teaching Nepalese royalty how to dance a Brazilian samba."

Key historical events are mentioned and experienced by the author. She and her parents escaped anti-Semitism and the horrors of the Nazi regime by emigrating to America, thus avoided the fate of 300,000 other Romanian Jews who were deported to concentration camps. She saw the rise and fall of Pan Am Airlines, later absorbed into Delta Airlines. She lived through the building of the Berlin Wall in 1961 that divided Germany into Communist and Democratic sectors and its destruction in 1989.

I wholeheartedly recommend this historical memoir. What an amazing collection of memories of a life lived to the full!

Sandra Olshaski's Disclosure: Thanks to Kelsey Butts of Book Publicity Services for sending me this book for review. I was not compensated in any other way, nor told how to rate or review this product.

Eva Maze is one of the most successful female theatrical impresarios in Europe with a career that lasted more than 40 years. She lives in Sarasota, Florida.