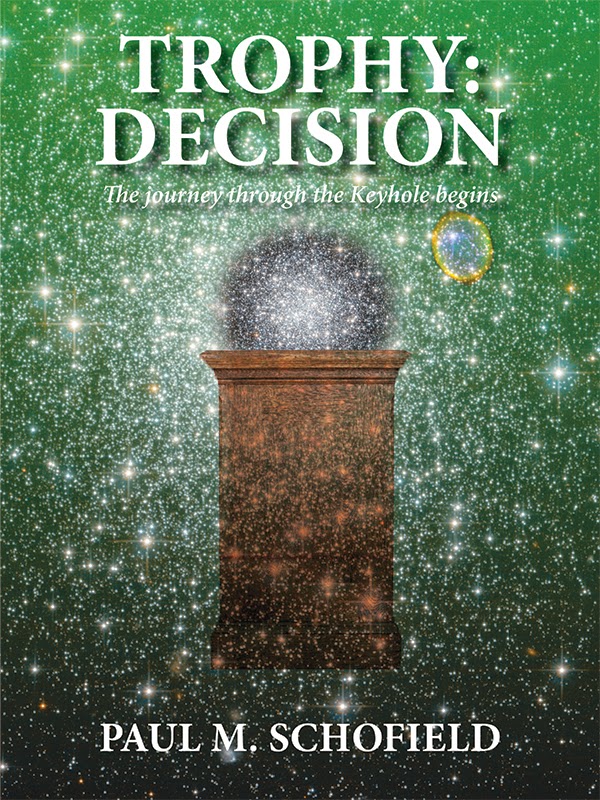 This novel is the third and final book in the Trophy Saga, an action-packed sci-fi trilogy, that brings to an end a fascinating world reminiscent of Star Trek. Although I’m not a sci-fi fan, these books have easily held my interest throughout. (You can read my review of Trophy Book One and Trophy: Rescue Book Two.)

The story continues from where the second one left off. The setting still takes place 500 years in the future, where mankind is under the authority of the New Victorian Empire, with ten women Guardians who are the custodians of CENTRAL—a massive computer government that rules the Earth and the colonized Solar System. Both the Empire and the Freedom Movement (led by rebel leader Dr. Eng) want to travel back in time through the Keyhole anomaly, a wormhole in space, to take healthy humans forward to the future to save the human race from extinction. But a third organization brings everything to a climax and to a decision that will change for the better the way things function, if only both the Empire and the rebels agree.

Once again, as in the first two books, I truly enjoyed the space world, intergalactic battles, fusion-powered technology and innovative concepts Schofield deftly creates. This author has a brilliant imagination! His description of the Keyhole’s appearance and adventures took my breath away. I love books that bring me out of my comfort zone to think about new things and transport me to new worlds that seem possible in the future. I particularly enjoyed the two missions of going back in time to get genetically sound humans, and doing so in a way that would not alter the future. And the mind-link between humans and animals was just as interesting this time around too.

In this third book we meet most of the characters introduced in the first two books. Once again, I had the same issues as in the last book. Not enough backstory and some awkward dialogue. I could not remember all the details from the past stories and thus felt I was missing out. I felt there was less tension in this book because I was not as emotionally invested in the characters. Although Schofield excels at creating space worlds and conflict, there is a lack of it between the genders. Their world was on the brink of extinction with not enough men and yet no issues of relationships, marriage or children was ever dealt with. No children or married couples are ever mentioned or shown in any scenes of all three books. Families are the basis of civilizations after all, so I was expecting that this was going to come up in this third book.

I was also expecting the relationship between Martin and Janet or Estelle and Marco to be the propelling plot of how to rebuild the human race with all its conflicting issues. Instead the relationships were platonic and static and gave very little indication that any of these issues were going to be dealt with. Martin was an android with no need for sleep or food, so how did this affect his need for a mate? How would he and Janet deal with his lack of being able to procreate or even grow old? Therefore, although I truly enjoyed this trilogy, I felt the ending still left too many unanswered questions for me. There was too much emphasis on duty to the Empire and not enough on everyday living and enjoyment.

However, if you are a sci-fi fan (or not) you will definitely enjoy the world-building and innovative concepts in the Trophy Saga. It made me long to see the panorama of a brilliant star-laden space viewed from the bridge of a coasting spacecraft.

Note: This book is rated C = clean read.
I will count this book toward the following challenges: Time Travel Challenge