While We Were Watching Downton Abbey by Wendy Wax (Audiobook Review) 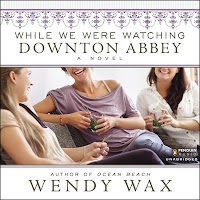 
Being a Downton Abbey fan, I was immediately attracted to the title of this story. Edward Parker, the concierge of a historic Atlanta apartment building invites the residents to enjoy weekly screenings of Downton Abbey and association afterwards so as to get to know each other better. Three very different women forge a friendship with each other and Edward.

Samantha Parker, a beautiful wealthy socialite who married young and for security, Claire Walker, a single mom who is now an empty nester and a struggling author, and recently divorced and young mom Brooke MacKenzie who suffers from low self-worth, find themselves enjoying these evenings and each others' company. As they experience life challenges, their friendship is tested and strengthened, all while watching Downton Abbey.

I really enjoyed this book and the characters. It was a fun book but it had its serious moments too. I think I could relate to Claire the most because she is a writer struggling with writer's block, but there was something in every character that appealed to me, including their struggles. Sometimes I wanted to shake Samantha for what seemed to be complacency, but as the story progressed I understood more where she was coming from.

Orlagh Cassidy is my new favorite narrator. Her narration was smooth and she was great with Edward's English accent and the Southern drawls of both the men and women. I was able to distinguish easily the voices of all three women, not only because of accents but also intonation. I was very impressed and I thing I wouldn't have enjoyed this book as much if I had just read it. If you haven't seen Downton Abbey you may miss some of the connections related to the story, but I think you can still enjoy this book without having seen the TV series. Or it may entice you to finally view it!

Just a note for those of you sensitive about alcohol. A lot of it flows in this novel. At every get-together there is either wine or hard liquor and the women have gotten drunk several times.

I recommend this book to all fans of contemporary fiction stories that deal with friendships and to Downton Abbey fans. This was a feel good book and perfect for light summer reading or listening.

Note: This book is rated P = profanity for religious expletives, and S = one sex scene, not too explicit.