The Journey by John A. Heldt

Posted by Laura at Library of Clean Reads on May 08, 2013 in Contemporary Fiction John A. Heldt Self-published Time Travel | Comments : 0 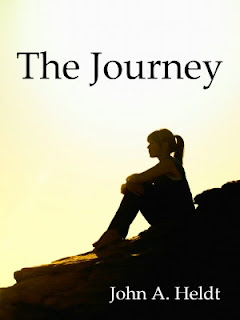 
I'm a new fan of John Heldt because of his ability to write stories that uses the time travel element to propel forward a good story without the fantastical part overwhelming the plot. And unlike other time travel novels, his characters only travel back within fifty years rather than hundreds. His first book The Mine (read my review) captured my attention and I enjoyed it so much that I wanted to read this second novel.

Recently widowed and childless, 48 year-old Michelle Preston decides to go back to her hometown for a class reunion. After visiting an abandoned mansion and entering a mysterious room, she ends up travelling back in time thirty years to 1979. She finds a job as a secretary at her old high school and meets her former classmates, her parents and her younger self, all of whom have no idea who she is. She befriends her younger self Shelly, as she was known in school, and also finds a new love. But knowing about future events propels her to make a sacrifice in order to save lives and give herself a second shot at life.

Once again, I was quickly taken in with the story and wondered how the time travel element was going to direct it. Michelle is in the position of being a mature woman in the same environment as her teenage self. She can see herself as she was back then, young and confused, with different eyes. It made me wonder what I would feel and do if I was suddenly thrown back to my teenage years to see myself in school with my friends and former boyfriend. Would I want to give myself advice and see if I took a different path in life? Probably. Or maybe not at all because of what those changes might mean for the future? You know how we all wish we had done things differently during those tumultuous teen years?!

Well, this book made me question all that because of what Michelle did. I have to admit that at first I had a hard time believing Shelly did not recognize herself thirty years into the future. I know my face hasn't changed all that much and I look pretty much the same way I did when I was in high school 28 years ago. Even her parents didn't recognize her. Also, there seemed to be little reaction toward seeing her former boyfriend who had been her husband for many years and had recently died. But once I got past this lack of dramatic opening (must be the Italian in me that expected it!) I was able to focus more on the storyline to see where it was heading.

Heldt managed to surprise me once again with his ending, which was bittersweet and satisfying. If you like time travel stories that deal with relationships and second chances you will like this one. It took me back to my high school days and entertained me with a story that had me questioning what I would have done differently if given a second chance.

Note: This book is rated S = sexual scenes, not too explicit.
I will count this book toward the following challenges: My Personal Time Travel Challenge