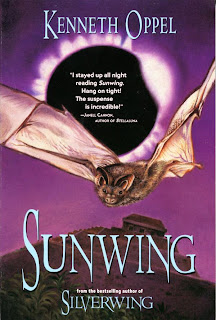 
This is the second book in the Silverwing series, and although we loved the first book (read our review) we thought this one was a little too dark for us. The messages are positive though, and we continued to love Shade as the runty bat who doesn't give up and stands up for what is right even in the face of danger.

Shade, now reunited with his colony, decides to go search for his father. This search takes him and the few bats travelling with him to a mysterious Human building that contains a large forest where there are thousands of other bats. There is plenty of insects to feed from and no owls to hunt them down, so many of the bats think this is Paradise. But Shade feels trapped, and he soon discovers that the Humans are taking bats from this complex and using them as weapons of war.

After finding a way out, he travels to the far southern jungle still in search of his father and comes up against Goth, now king of all the Vampyrum Spectrum, giant cannibal bats. This is where the book gets dark because Goth has been sacrificing bats to his god the same way as the ancient Mayas who would tear out the heart of their sacrificial victim and eat it while it still beat. Now he is preparing to create eternal night by sacrificing, one after another, one hundred of their imprisoned prey--bats, owls, and rats. This is to take place during the sun's eclipse.

Oppel's writing is brilliant, of course, and as in his first book, the world building is good. So good we felt the evil permeating the tall temple where all the sacrificing took place, and we felt the fear and darkness it instilled. We also loved Shade's character again as he now helps to bring about peace between the bats and the owls.

The book has a good satisfactory ending with no cliff hangers, and for now my son and I feel we can stop reading here. Eventually we may pick up the third book and see how Shade's story continues.

Note: This book is rated V = for scenes of gruesome killing for sacrifice.

Disclosure: We borrowed this book from the library. We were not told how to rate or review this product.