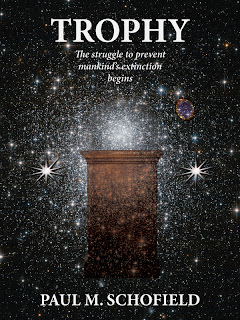 
I don't usually read sci-fi novels, so I was pleasantly surprised at how much I enjoyed Trophy, the first book in the New Victorian Empire saga. With plenty of action, interesting concepts and time travel, it was easy to keep turning the pages. Star Trek fans will enjoy this one.

The story takes place over 500 years into the future where women are in positions of authority and the Earth and Solar System are ruled by CENTRAL—a massive computer government. The story revolves around Galen Bestmarke, a villain who has discovered how to time-travel with the help of Louis Franelli, a genius engineer who once worked for the New Victorian Empire. Lieutenant Janet Rogerton is on assignment to capture Bestmarke before he misuses this technology and puts the human race in peril.

First-time author Schofield succeeds in building suspense and moving the action along. The descriptions and futuristic concepts of the space world setting—fusion-powered starships, space flights, advanced technology, the Keyhole, androids and battle strategies—were brilliant. The whole theory of the guider/pouncer link in which a trained crew member is mentally linked with an animal to fight in space battle was fascinating. The character developments of Martin and Panther and their work as a team was one of the most interesting aspects of the story.

It's true there are some far-fetched ideas that didn't quite work for me because they needed further development. All the crew members and Planetary Control Corps were women. No men. I really had no idea what the men did on Earth or in space. It seemed unbalanced. The only men in the story were the few villains who rebelled against all-women rule. I liked the male characters better than the women, who came across as very idealistic, emotional and soft in a way that undermined their positions of authority. But then again, it's fiction, and the message of peaceful and just rule did come across strongly, which I did like. Galen was the best developed character, with dialogue and actions that suited his twisted persona well.

I did feel that this novel would have benefited from better editing to polish the text from the overuse of ellipses (...) and using dialogue to explain back-story. But because Schofield is a very good storyteller, I was able to ignore these points and truly enjoy the novel. The ending is left open with many future possibilities. His next instalment should prove to be interesting, and I look forward to seeing how far this promising new author will go.

Interview:
I was curious about a few concepts in Trophy, and Paul was kind enough to answer all my questions!

1. Your idea of a mental link between humans and animals in the book is fascinating. How did you come up with it?

I would love to claim the idea completely as my own, but as wise King Solomon said, “There is nothing new under the sun.” Many years ago as a teenager I read a sci-fi short story that used a similar concept to protect star-ships from space dragons. I enlarged and tweaked the idea to something that would be theoretically possible for medical science five centuries in the future. I tried to make the point that it is not paranormal or ESP, but based entirely on advanced technology. I truly believe that animals are much more intelligent than they are given credit for, and the mental link was one way to explore those possibilities.

2. I loved your concept of time-travel through the Keyhole in space. (Such an appropriate, catchy and suitable name for it, too!) If you could time-travel, where would you go and why?


Time is a difficult concept to wrap your mind around. Time had a beginning but it has no end. It is linear for us humans, moving in one direction. If you change that, it starts getting exciting but dangerous … just observe, don't touch anything that could alter the future. If I could go back in time I would love to see the creative events of the Earth. And what about the mystery of the dinosaurs? It would be fascinating to see the great civilizations of the past and how things really were. It would be interesting to see the great men and women of the past in action, comparing what affect their lives have on us today. If I could time-travel, I'd go to Earth five centuries in the future to see if anything in my wild imagination has come true. Humans are explorers – only the vehicles change – star-ships, time-travel, etc.

3. When is your next book in this sage going to be published?

The first sequel, TROPHY : RESCUE, is under construction now and will hopefully be finished by summer 2011. It starts at Io Station, Jupiter, where the first book ends. Character development continues along with new and exciting characters and plot twists.

4. The space setting in your book was very vivid. What inspired your creation of it?

Movies and TV series such as Star Wars and Star Trek played a large part in fueling my imagination. I've also studied and observed the heavens for many years as an amateur astronomer. This has particularly helped me to be accurate in my descriptions of space and space travel. TROPHY takes place in an age of fusion engines and space travel confined to the Solar System, before warp-travel between the stars has been accomplished. I have tried to keep the science real and technically possible.

A favourite book is one that is read often, that you never tire from, that gives you insight, and is comfortable – you can let down your guard and thoroughly enjoy it without flinching at what is written. That substantially limits the field. My favourite secular author is Jane Austen. And of her work, “Pride & Prejudice” is at the top of my list. Her command of the English language, the subtlety of nuance in her dialogue and character development, and the intricate plot twists are amazing. I love all her work … I wish I could go back in time and secretly peek over her shoulder as she creates. 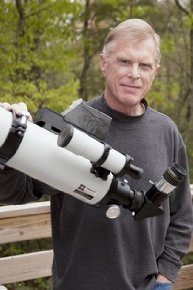 Through the pages of my writing, I enjoy sharing my rich inner world, as so aptly described by my ISFJ personality profile. I once read that truly great stories create a universe in which the reader can become totally absorbed, and that is what I endeavor to accomplish for my readers. My home office in the mountains of western North Carolina affords me the privacy I need to write and after a particularly intense writing session, my wife, Ellen, tells me that my eyes portray that I'm still in that world. We take that as a sign that the creative juices are flowing freely. I'm not sure whether my inspiration for Trophy came from my childhood in Montana that nourished my love of animals and the outdoors, my architecture career that gave me an appreciation for details like reworking and editing, or my amateur astronomy hobby that has fostered within me an awesome appreciation for the heavens...but I kind of think it may have been all of the above. My inspiration is further fueled by my writing buddies, our rescued cats: Riley, a British short-hair, and Yoda, a black Bombay who is a miniature of Trophy's great black cat, Panther. I'm currently working (as fast as I can!) on the sequel to Trophy, which will be entitled, Trophy: Rescue. Ultimately, there will be five books that make up the Trophy saga.