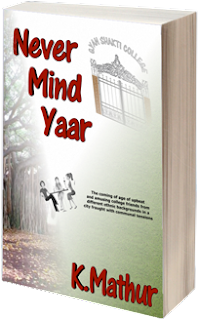 I like reading multicultural books where the setting is very different from my own. When a friend of mine was studying the Hindi language, we would watch countless long Indian movies together and I grew fond of this culture.

Never Mind Yaar is set in Mumbai, India, and it follows the lives of four close college friends of different ethnic backgrounds: Binaifer, Louella, Shalini and Bhagu, three girls and a boy. Author K. Mathur uses vivid descriptions of Indian life and scenery to immerse the reader in her story, showing her love for her country. I really enjoyed this about the book. I especially liked a wedding scene that reminded me of the one in Bride and Prejudice, a Bollywood version of Pride and Prejudice.
When I first started reading, though, it was evident this was a self-published book from the quality of the editing, page and text layout, and book cover. The characters were superficial and there was no real action for the first fifty pages or so. I was getting frustrated. I felt I was reading about ten-year-olds and not the complex and intriguing teen persona. However, I persisted in reading. And the story becomes more interesting. The issue of economical differences and their implications became more apparent as upper-class Shalini falls in love with Bhagu, whom she knows will not be accepted by her family who have already planned an arranged marriage for her.
Banaifer and Louella now scheme to get Shalini to confess and to get the star-crossed lovers together. Shalini is clearly distraught since she doesn't want to marry the man her matriarch grandmother, Mem, sets up for her, and she does not have the courage to stand up to her and refuse the match. However, the two friends don't talk to Shalini about this very real issue and neither does Shalini. Besides having fun, I truly wondered what their friendship was based on. Later, when the relationship gets serious and Shalini is torn between openly choosing Bhagu and confronting her family or accepting the arranged marriage, she becomes more and more depressed. Shalini never talked to her friends about Bhagu. This is where, again, the girls' friendship could have helped her deal with her conflicting emotions and where I found the story lacked in depth.
Throughout much of the book the dialogue between the girls was redundant and they were always giggling or laughing. I longed to know what they really thought deep down inside as they lived momentous years of college life. What did they aspire in life? What did they like or hate? On the other hand, the youths in this story were a mix of the modern and old-fashioned teen and this could be seen when the issues of dress, arranged marriages and accepting ethnic differences were explored. This was a refreshing change.


I thought Mem and Bhagu were the best developed characters, since they were realistic. I really liked how well the author portrayed Mem's character and would have loved for her to play a major role. She was a strong female character and represented the traditional Indian woman. Only half-way through the book do the rose-colored lenses come off and we see the ugly side of the things happening in the city of Mumbai. The story gets interesting when Bhagu works to bring about change. He has a head on his shoulder and it showed. This topic of political and communal unrest could have been explored further since I felt it was an important issue.


The topic of arranged marriages was very interesting and I wanted to know how Shalini, her family and Bhagu would deal with it. Shalini, who is very wealthy and chauffeured to school every morning had the unrealistic expectation of eloping with Bhagu, although he was currently a student, not employed and not in the same social status as her. She did not come across as very bright, only pretty and pampered. I did like the way things worked out in the end and it made me appreciate Bhagu's character. The whole incident with the chauffeur and its repercussions also gave me insight in the Indian way of thinking.
Clearly, Mathur has an important message to convey and her story would have shined through more forcefully had this book been professionally edited, however, this author has a bright future if she continues to bring to the fore topics at heart in a culture that is interesting and in need of much societal and political change.
To learn more about this author, visit http://nevermindyaar.com
Disclosure: Thanks to K.Mathur for sending me this book for review. I was not told how to rate or review this product.