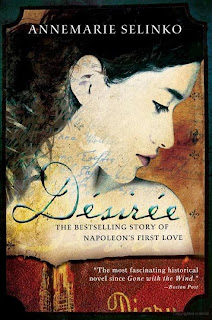 Désirée is an epic and sweeping historical novel written as the diary format of Bernardine Eugénie Désirée Clary, Napoleon's first fiancée. It covers the period from 1794 to 1829 when Napoleon is a young dirt-poor soldier who meets Désirée, the 14 year-old daughter of a silk merchant, to his rise and fall as the Emperor of France and her coronation as the Queen of Sweden and Norway.
This book fascinated me. Initially it was slow and sometimes the political and military details were extensive, but overall I loved the story. Halfway through the book, the political intrigue grew and I looked forward to picking up where I left off reading, as the events became more suspenseful, especially during the Hundred Days. Because it is written in the first person, I quickly was attracted to Désirée's voice, her innocence and her eventual transformation. She was sensible, with a head on her shoulders, a quick wit and a sense of humour. I was swept away into her world as I read her intimate thoughts, her desires, her insecurities, her intelligence even as a young girl and on into womanhood.
There are many characters in this novel, many of them based on historical figures. We get an insider's view of the Bonaparte family, since Désirée became Napoleon's sister-in-law when her older sister, Julie, married Napoleon's brother, Joseph. Initially, Désirée is devastated when Napoleon marries Josephine, but later she becomes friends with her. The book depicts Napoleon as ambitious and self-centered, fighting for the freedom of the French people more for glory and fame than true love of the cause. From beginning to end, it is clear that Désirée loves her country and the Declaration of the Rights of Man, which her father taught her to understand and respect. This theme runs throughout the book and influences Désirée's decisions and actions.
The novel covers a lot of history, but the account in never dry. Actually, history is brought alive through the eyes of a woman caught in the middle of it. Sometimes, though, I found there lacked emotion in the accounts, such as when she is reunited with her son and later, her husband. The period of the French Revolution was a time of much political unrest, and I really liked reading the perspective of Désirée, who married Marshal Jean-Baptiste Bernadotte. He later was adopted by the childless Swedish King Karl XIII and became King of Sweden and Norway and subsequently transferred his family to Sweden.
This is where I had a hard time with Desirée's decision to leave Sweden, her husband and young child shortly after she arrives because she felt she was not wanted by the Swedish aristocracy and people. She went back to Paris where she unselfishly helps her family, particularly Julie, who was weak and whiny. Although she and Jean-Baptiste love each other, they accepted this long-distance separation, and remained married and loyal to one another.
This book sparked my interest so much that I did extra research on the Internet, and I now want to see the 1954 movie Désirée starring Marlon Brandon and Jean Simmons. If you are a historical fan, this book will not disappoint. Selinko's writing is captivating. You will be drawn to Désirée, a commoner who was a part of the life of Napoleon, helped establish the Bernadotte dynasty in Sweden and ruled as Queen without forgetting her humble beginnings.
Disclosure: Thanks to Danielle from Sourcebooks for sending me this book for review. I was not compensated in any other way, nor told how to rate or review this product.