I'm excited to have discovered this murder mystery by a local author set in my home province of Quebec!
Book Details:

In a small village in the Laurentians north of Montreal, a reclusive older woman is found strangled and frozen outside her home. Roméo Leduc, the enigmatic Chief Inspector for Homicide, is one day away from his first vacation in years, and reluctantly answers the call on the case. Roméo suspects a local biker gang is involved in what appears to be a robbery gone awry—or was the old woman a victim of a violent hate crime?

Marie Russell, a writer and divorced mother of two, lives next door to the victim. Marie becomes an inadvertent detective when her mother, suffering from dementia, offers a startling clue that links the woman’s murder to a terrible incident that happened on Marie’s suburban Montreal street in the 1970's. Together, Marie and Roméo discover that the murder goes even further back, to another crime during the darkest days in Hungary at the end of WWII. As they combine wits to find the killer, they are forced to face demons from their own pasts as they confront a cast of characters from the Quebec of yesterday and today; where no one and nothing is really as it seems.
My Review:
Reviewed by Laura Fabiani
I was excited when I discovered this murder mystery by a local author set in my home province of Quebec! Recognizing the places, the language and the culture was a bonus for me, and I read through this novel rather quickly. There was a lot in this book that resonated with me. And it's set in October so it's a perfect autumn read.
A senior is murdered in her home in the small village of Sainte-Lucie-des-Laurentides. Roméo Leduc, Chief Inspector with the Sûreté du Québec Police is on the case even though he was supposed to be leaving for a long-awaited vacation. Marie Russell, a former marine biologist, lives in Sainte Lucie. She is a college teacher on sabbatical writing children's nature books. Her mother has Alzheimer's disease and Marie is going through the painful process of moving her into a care facility. Going back to her childhood home in the west end of Montreal to help her mother brings back painful memories. As the story progresses, we get to see the connection to the murder mystery.
There's a lot going on in this book, but it's not difficult to follow. The murder mystery starts off well but then moves at a slower pace as we get a lot of backstory from Marie's past as well as some of the other characters. As far as characters are concerned my favorite was Ti-Coune. He came across as so real to me. Although he played a secondary character, I would have wished him to have been more involved somehow. Roméo came across as the typical overworked detective with a good heart.
Marie...I struggled a bit with her character. She comes across as unhappy and cynical. I found a lot of the cultural references made about Quebec were negative. There's so much about Quebec to love and I wish that would have been brought out too. For someone who had been a former marine biologist, none of Marie's work experiences leaked into the pages of this story. I was trying to figure her out, get a real sense of who she was. I felt she was incomplete and came across as a middle-aged kinda grumpy woman. She grew on me though, because of the scenes with her mother. I work in the public health sector with families and caregivers of seniors who have dementia so this resonated well with me.
Apart from this, I thought the plot was interesting and taught me a part of Canadian history I was unaware of regarding former Nazis given entrance into Canada. This was an intelligent read as various components of history are weaved into the story. The book description states that Marie and Roméo "combine wits to find the killer", but unfortunately this is not really the case. There is little interaction between them and while Marie shares a piece of information that helps to tie in to the killer, that's as far as it goes. There is no relationship development between the two which is fine, except the epilogue came out of the blue. And the series is named A Russell and Leduc Mystery, so I was expecting more introduction and development of them as a duo, not necessarily a romantic duo, but a duo nonetheless.
The Dogs of Winter is the newly released second book in this Canadian series and seems to be set more in Montreal than the outskirts of the city. I'm interested to see what Lambert has in store for us next, both as a series and regarding the sleuthing duo. For readers who enjoy Canadian literature, this one is appealing and a good autumn read.

Buy the Book:
Amazon.ca ~ Amazon.com ~ Chapters Indigo ~
B&N ~ Kobo
Add to Goodreads
About the Author:
Ann Lambert has been writing and directing for the stage for thirty-five years. Several of her plays, including The Wall, Parallel Lines, Very Heaven, The Mary Project and Two Short Women have been performed in theatres in Canada, the United States, Europe and Australia. She has been a teacher of English literature at Dawson College for almost twenty-eight years in Montreal, Quebec, where she makes her home. 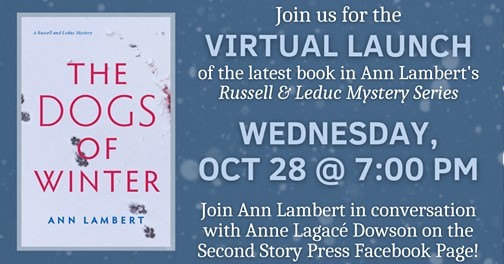 The Dogs of Winter by Ann Lambert (Second Story Press)

Reading and Q & A hosted by Anne Lagacé Dowson

Montreal, October 2020 • Join awarded playwright, director and novelist Ann Lambert for a book reading and insightful Q & A at the launch of her ‘torn from the headlines’ sophomore mystery novel, The Dogs of Winter (Second Story Press). This latest book follows the success of The Birds That Stay; book one in the Russell and Leduc mystery series which was the Quebec Writers’ Federation’s Concordia First Book Prize finalist. The launch is hosted by radio journalist and activist Anne Lagacé Dowson .