A fictional account of a remarkable woman, who fought alongside Garibaldi in his revolutionary wars.

Experience the "epic tale of one woman's fight . . . to create the life of her dreams" in this sweeping novel of Anita Garibaldi, a 19th century Brazilian revolutionary who loved as fiercely as she fought for freedom (Adriana Trigiani).


Destiny toys with us all, but Anita Garibaldi is a force to be reckoned with. Forced into marriage at a young age, Anita feels trapped in a union she does not want. But when she meets the leader of the Brazilian resistance, Giuseppe Garibaldi, in 1839, everything changes.

Swept into a passionate affair with the idolized mercenary, Anita's life is suddenly consumed by the plight to liberate Southern Brazil from Portugal -- a struggle that would cost thousands of lives and span almost ten bloody years. Little did she know that this first taste of revolution would lead her to cross oceans, traverse continents, and alter the course of her entire life -- and the world.

At once an exhilarating adventure and an unforgettable love story, The Woman in Red is a sweeping, illuminating tale of the feminist icon who became one of the most revered historical figures of South America and Italy.

Being of Italian descent, I had heard the name Garibaldi as I was growing up, but I knew little of Italy's history of unification, and even less of Anita Garibaldi. Reading this book was enlightening and prompted me to do research on this formidable Brazilian woman who won the hearts of Italians by being the first wife and comrade-in-arms of revolutionary Giuseppe Garibaldi.

We meet Anita as a headstrong child who was close to her father and learned the life of a gaucho from him. She was a fearless child and loved working with her father rather than being in school or in the house with her mother. However, after he father's death, her mother had other plans for her and had her married off at 14, making Anita miserable. After her husband leaves her to go to war, Anita meets Garibaldi while he was exiled in Brazil and the rest is history, as they say.

Throughout the story, we see Anita and Garibaldi as a close couple who shared a passionate love and the same vision for her country and his. In the ten years they were together, Anita was Garibaldi's partner, fighting alongside him, tending to the injured men in the battlefield, and campaigning with him for the revolution. Throughout their arduous travels in Brazil, Uruguay and Italy, she also bore him four children. Her physical and emotional strength were exceptional and she is remembered as a heroine alongside Garibaldi, with statues of her in Brazil and Italy.

The author aptly titled this novel The Woman in Red because Garibaldi's volunteer soldiers wore red shirts that became famous in all of Europe. I enjoyed this introduction to Anita Garibaldi and I'm curious to learn more about her. I wish the author would have included how she researched for the writing of her novel and how closely she followed Anita's life and timeline.


Disclosure: Thanks to NetGalley and the publisher for sending me this book for review. I was not compensated in any other way, nor told how to rate or review this product. 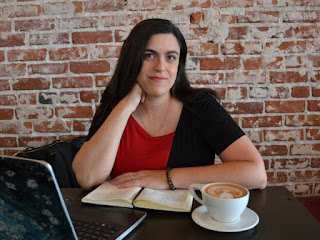 Diana Giovinazzo is the co-creator of Wine, Women and Words, a weekly literary podcast featuring interviews with au­thors over a glass of wine. Diana is active within her local literary community as the vice president of the Los Angeles chapter of the Women's National Book Association. The Woman in Red is her debut novel. For more information, please visit her website: https://dianagiovinazzo.com/.