The Me in Memory by Aspen Bassett (Review) 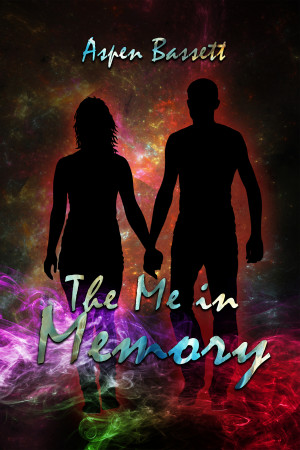 This is the sequel to A Penny Lost, which I read last year and loved. Check out my thoughts on this second installment of the Penny Lost trilogy!

It’s been one month since Penny Grace traveled through time with Stranger, the hottie from next door. One month since she changed the course of the future, developed mysterious control over a dark force, and somehow got erased from time... Now, not even her own sister remembers her.

Penny feels the daily sting of not belonging in her own home, so when Stranger asks for help in preventing his brother Jack's death, she jumps at the opportunity.

But their simple rescue mission soon turns impossible when a darkness named The Shadow offers Penny an impossible choice: win her family back by taking down The Void and restoring the natural timeline, or save Jack and ensure the world’s collapse.

Not one to trust a threat, Penny decides to find The Void herself and demand help. Only now The Void is masquerading as a human with no intentions of risking his freedom to save a dead man. Secrets pile up between Penny and her Stranger as she struggles against an inevitable sacrifice.

After reading the first book A Penny Lost, which I loved and which had a cliffhanger ending, I was anxious to get my hands on this second book. I think if you haven't read the first book, a reader could be lost as there is not much back story included, therefore it's best to read the first book which sets the stage for everything. And yes, this book also has an open ending with questions still unanswered. So I'm assuming (and I hope!) there's a third book on the way.

In the first book, Penny and Stranger were sucked by a black void and transported back in time. Stranger had no memories at the time. But now they have been back for a month. Stranger has his memories back but Penny has been erased from history, hence her family does not know she even exists. They want to go back in time to fix this and to save Jack, Stranger's brother. On a side note, I wish Stranger would have told Penny his name rather than try to have her guess. He was fine as Stranger when he didn't know his own name but once he did, I just thought it was weird to keep calling him Stranger.

Penny can see auras in the form of colours. This makes her quite unique. As in the first book, I found this made the story different and fascinating. In The Me in Memory, we now learn more about the Void and the Shadow. I must admit, the whole plotline that revolved around these entities was hard to follow. It didn't always make sense to me. However, as I progressed further into the book, I could see where the author was going with it. The friendship between Penny and Stranger deepened. The historical aspects of the time travel were interesting. I thought Penny's sister Dinah was annoying and I wasn't always sure who's side she was on. Perhaps this was done intentionally to build up the suspense. She did grow on me by the end of the book.

Overall, this was a good sequel, even though it didn't grip me as much as the first book did. Sometimes this happens with the middle book in a trilogy. Penny seemed a little too superhuman in her emotions. She brushed off very hard situations too easily. I didn't feel her losses as deeply as I felt Stranger's.

This was entertaining and fun to read. I recommend this series for lovers of time travel fantasy novels. And I look forward to seeing how this story continues and ends. What will Penny have to do to make things right? Will her life ever be the one she most desires? Can't wait for book 3!

Aspen Bassett works at a library, telling stories and suggesting books. When she's not working, she's usually sipping hot cocoa and wondering what would happen if she had superpowers. She's been published in multiple anthologies including Oomph: A Little Super Goes a Long Way and Inaccurate Realities.

Aspen grew up learning about chakras and auras and the true power of imagination which slips into her writing whether she intends it to or not. In college, when she wasn't busy working on her degree in Creative Writing, Aspen also got her certificate in Women's Meditation (basically general energy work). Now, she's working toward a diploma in Integrated Healing Arts with a certificate in Hypnotherapy.