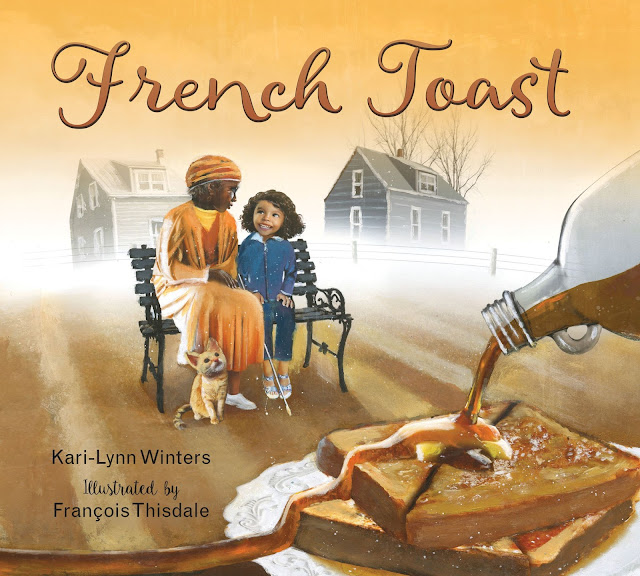 The message to be proud of one's culture and nationality shines through in this warm story by Kari Lynn Winters.

"Even though Nan-ma's blind, she sees things others do not."

And so begins this book whose message to be proud of one's culture and nationality shines through. Phoebe has a good relationship with her grandmother who is blind. On weekends she is her neighborhood guide. As a mother, I liked that this story included a grandma and her wisdom. When Phoebe has to explain why the boys from school yelled out, "Hey, French Toast!" to her, she is embarrassed because she knows it's because of the color of her skin.

Since her grandmother has never known the colors of skin, she asks Phoebe what color her skin is. So Phoebe describes it like tea after milk is added. And so the story continues. With Nan-ma's gentle prodding, Phoebe gets to talk and think about her parents. She explores in her mind what she loves about them, her childhood, her favorite foods and her mixed nationality.

Living in Quebec, we are very familiar with the French-Canadian culture and mixed marriages among the very diverse ethnic groups that live here. My son and I enjoyed this story and we liked its message. It's a book that should resonate well with children living in Quebec and perfect to introduce others to a culture that embraces mixed marriages. Children need to feel proud of who they are and where they come from. Using food to bring out the beautiful qualities of a culture works well. My son and I were getting hungry reading this book!

The illustrations use earth-tone colors and are soft. They are a mix of digital media and acrylic. What this means is that they are a mix of real-life photos with the drawings. So, the faces of the characters, for example, are actual real photos but blended in with the drawings. My son noticed it right from the first page and told me he is not fond of this technique. I had to look more closely. In the end, we agreed that the way the illustrator blended the two worked well and also the way he highlighted the food and brought it out in the illustrations was unique.

This book would make a great addition to a home or school library. It is an excellent way to introduce new cultures and to open the discussion of how to embrace who we are.


About the Author and Illustrator:

Kari-Lynn Winters is an author, poet, and performer. With over sixteen picture and poetry books published, she has won the British Columbia Book Prize silver medal twice, and been nominated numerous times for the Christie Harris Illustrated Children’s Literature Prize and the Chocolate Lily Awards. Bad Pirate won the Rainforest of Reading Award. Kari-Lynn loves being in the classroom and now teaches drama in education at Brock University. She lives in St. Catharines, Ontario.

François Thisdale’s work blends traditional drawing and painting with digital imagery. He is the illustrator of The Stamp Collector, which is on IBBY Honor List, and That Squeak, an honour book for the IBBY Canada Elizabeth Mrazik-Cleaver Picture Book Award. He has also won a Notable Books for a Global Society Award and the Crystal Kite Award, and been a finalist for the TD Children’s Book Award and the Amelia Frances Howard-Gibbon Illustrator’s Award. François lives in Montreal, Quebec.


Disclosure: Thanks to the publisher for sending us this book for review. We were not compensated in any other way, nor told how to rate or review this product.