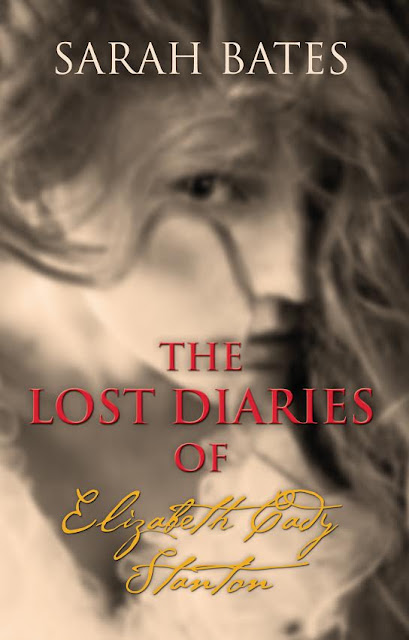 I am delighted to feature this book on my blog today. I loved reading it as it portrays a strong female character based on a historical figure. I was intrigued by the book cover because of its mysterious allure. Be sure to read my review and my interview with the author as I ask her about it. And enter my giveaway to win a copy!

From award winning author, Sarah Bates, Johnstown, New York, 1823: It is a time when a wife’s dowry, even children, automatically becomes her husband’s property. Slavery is an economic advantage entrenched in America but rumblings of abolition abound. For Elizabeth Cady to confront this culture is unheard of, yet that is exactly what she does. Before she can become a leader of the women's rights movement and prominent abolitionist, she faces challenges fraught with disappointment. Her father admires her intellect but says a woman cannot aspire to the goals of men. Her sister’s husband becomes her champion–but secretly wants more. Religious fervor threatens to consume her.

As she faces depression and despair, she records these struggles and other dark confidences in diaries. When she learns the journals might fall into the wrong hands and discredit her, she panics and rips out pages of entries that might destroy her hard-fought reputation. Relieved, she believes they are lost to history forever. But are they? Travel with Elizabeth into American history and discover a young woman truly ahead of her time.

I thoroughly enjoyed reading The Lost Diaries of Elizabeth Cady Stanton. This fiction story is based on the early life of Elizabeth Cady Stanton, American suffragist, social activist, abolitionist, and leading figure of the early women's rights movement. Author Sarah Bates deftly brought this historical figure to life with a writing style that captivated me from the first page. I love historical fiction and the author succeeded in transporting me back to the 1800s New York to the life of a young woman who, through her father who was  judge, became aware of the lack of human rights for women and black slaves.

The story begins when Elizabeth is an elderly woman about to give a speech and she spends a few hours beforehand in her rooms recounting her earlier history to a young admirer of her human rights work. She does this by revealing her diary contents. They show her struggles as a young woman who fought to go to the same schools as her brothers and her most intimate thoughts as she grew from a child to a woman. It's a well-told story, and being a fan of Jane Austen, who I thought was a woman ahead of her time, this book reminded me of Austen literature.

The pages flew by and I was sad to come to an end to Elizabeth's story when she marries at the age of 25 to a man who shared her views. The story then resumes where it left off, Elizabeth having just read her diary to the young follower, who now is appalled at what she's learned. This is where I became confused in the story. I couldn't understand what was so bad about what was revealed in the diary. If anything I admired Elizabeth even more because it gave a portrait of a strong and confident woman.

Nonetheless, I loved this book! It was well-written, inspiring and entertaining. For any woman who thinks she can make a difference in this world, stories like this are encouraging. This book has made it to my list of Best Reads of 2016. I'm a new fan of Sarah Bates and hope to read more from her soon. Fans of clean historical fiction with strong women characters will delight in this fictional portrait of one of America's courageous forward thinkers.

My Interview with Sarah Bates:

LCR: Hi Sarah, thank you so much for taking the time to chat with me today. Your novel appealed to me for various reasons. It includes a strong female and it’s historical fiction, one of my favorite genres. What challenges did you face in writing this novel?

SB: I am not a historical fiction writer, though nothing stops me from writing what I choose. As for the protagonist, I am always drawn to strong women, and particularly admired Elizabeth for what she did for women’s rights when few women dared speak out. The most significant challenge was making sure the information I used was correct when I wove it around the facts of Elizabeth’s life. For example, the clothing, meals, transportation, settings, even the famous people of the time she might have met.

The research and writing of this novel took six years during which time I visited Elizabeth’s hometown, Johnstown, New York where I walked where she walked, poked around in the historic buildings there when she was, and traveled to Troy, New York to read Elizabeth’s report cards and correspondence in the archives of the Troy Female Seminary (Emma Willard)!

LCR: Is there a woman you admire in our time because she is ahead of her time?

SB: There are two: Jane Fonda for whom nothing seems impossible to master, and Hillary Clinton for her sheer tenacity, especially now when pitted against an adversary no one ever could have predicted. Neither woman is “ahead of her time” but the right woman for the right time.

LCR: I was intrigued by your book cover. Can you tell me more about it?

SB: When I first furnished the designer with an overview of the story, I was distracted by some unpleasant events in my life. As a result when he sent the cover my jaw dropped because it did not reflect the theme of the story. That cover, done in blue, grey and purple reflected the story of an old woman–even with a photo of 80-year-old Elizabeth right in the center! I have worked with this designer before and knew it was my fault entirely. After giving him the “look, tone, and feel” –advertising terms–for the story I should have told him about in the first place, he sent me four photos of troubled women and two designs using old-fashioned diaries. From those images I chose the ones you see on the now-perfect cover of the book.

LCR: Do you have any other works in process?

SB: I do! I am about 35,000 words into a contemporary novel set in a small Southern California town. The story follows six people over the space of a week as they live their ordinary lives plagued by a rainstorm that ultimately results in a 100-year-old flood predicted for the region.

I absolutely adore the 1920s and 1930s for the clothes, music, art and architecture, movies and literature so I’d be in Paris, New York or Los Angeles.

SB: I will still be writing. But, after each long novel–and the one I’ve mentioned above might be the last–I swear I will go back to short fiction which is fun, allows me to play with voice and setting, and I can “Save” it and go back to it without wondering where the heck I was when I last worked on it!

LCR: Thanks so much for taking the time to chat with me!

Sarah Bates worked as an advertising copywriter for ten years then as a freelance writer. Her clients included a book packager, the local chamber of commerce, a travel newsletter and a weekly newspaper where she covered business and schools. Her short fiction has appeared in the Greenwich Village Literary Review, the San Diego North County Times (now the Union-Tribune) and the literary magazine Bravura. She is the author of Twenty-One Steps of Courage, an Army action novel published in 2012 and co-author of the 2005 short story collection, Out of Our Minds, Wild Stories by Wild Women.

She is the winner of Military Category, for Twenty-One Steps of Courage, Next Generation Indie Book Awards (2013) and 2nd Place Finalist, The Lost Diaries of Elizabeth Cady Stanton, Unpublished Novel- Category, San Diego Book Awards (2015) Bates was an English Department writing tutor at Palomar College in California for ten years. She continues to privately tutor both academic and creative writing students and is writing a new novel. Sarah Bates lives in Fallbrook, California.