Spotlight on one of my favorite series: The Roma series by Gabriel Valjan (Interview & Giveaway!)

Last year I discovered the Roma series. Of course, if you've been reading my blog you know that I love books set in Italy. This series got me hooked from the very first book Roma Undergound, set in the city of my mother and her family. Gabriel Valjan gets the Italian culture. What's more, the series has a strong female protagonist, a colorful cast, and a compelling and suspenseful plot. Perfect combination for me!

After reading the 4th book, I was thrilled to find out Corporate Citizen Book #5 was going to be released Oct 5, 2016! 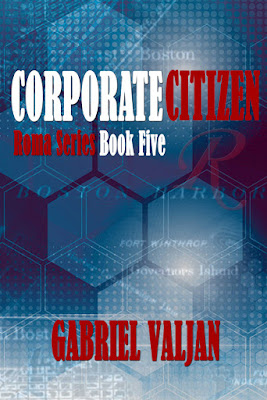 I've read Corporate Citizen and my review will be posted on Essentially Italian tomorrow. Watch out for it. I savored this one as I revisited some of my favorite characters as they got caught up once again in a dangerous situation.

Read my reviews of the series:

Today, I have the pleasure of featuring Gabriel Valjan as I interview him about this fun and intelligent series. Read on and make sure to enter the giveaway below!

My Interview with Gabriel Valjan 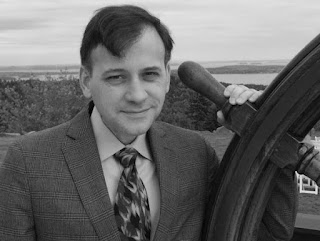 LCR: Welcome to Library of Clean Reads. The Roma Series has become one of my favorite series. Did you plan to make this a series before writing the first book or did it just evolve into one after publishing?

GV: Thank you for reading and for the compliment. The Roma Series began as a provocation from a coworker: create and write about a compelling female protagonist. At the time, Alias was a hit on television and I was just entering the world of Andrea Camilleri’s Salvo Montalbano. The short story, however, focused on a woman named Alabaster and her employer, Rendition. The rest came much later. When I was completing Roma, Underground, I realized that I wanted to continue my foray into Italian culture.

LCR: How did you come up with the idea of a woman hacker taking on the Italian mafia with a group of dedicated law enforcers?

GV: The idea of engaging the mafia had not been my original intention. Rendition investigated white- collar crime. While I do think Italy and the mafia are unfortunately synonymous, I was more intrigued by apprehending and prosecuting criminals for crimes that are lacking in legislation. In researching the mafia, I realized that it is structurally medieval in organization, but modern in practice. The Sicilian mafia, for example, is international, corporate, and involved in both legal and illegal enterprises.

I created a female character because I was tired of reading male action figures, or females who were disguised revisions of male characters. I intended Bianca to be intelligent, a tech, and a dimensional character with strengths and weaknesses.

LCR: Being Italian-Canadian, I am constantly impressed with your knowledge of the Italian culture. To what do you attribute this?

GV: Thank you for the compliment. I do research and I am fortunate to have a cultural editor, Claudio Ferrara, who is a journalist and a linguist. It helps that I have traveled to Italy and spent time there. What I hope carries over to the reader is my empathy and openness to Italian culture. Most Americans have a distorted view of Italian culture, and I try to show Italy’s diversity. Few people know, for example, that Italy is a manufacturing giant and peerless when it comes to electronics for space exploration.

LCR: After reading Corporate Citizen Book #5 in the series, I was thrilled that you have Crunch City Book #6 coming up next. Do you plan on continuing the series after Book #6 or will you decide to end it?

GV: I do plan to continue the Series. Without giving any spoilers from Book #5, I will state that Crunch City is the last time that readers will see Bianca in an English-speaking environment. That decision is an aesthetic and emotional decision on her part about where she feels ‘home and family’ exists for her.

LCR: Can you tell me more about any other works in process?

GV: My publisher, Winter Goose Publishing, has accepted another series that I created. The Company Files is a multi-book series about the early days of the intelligence community. This series draws from real history and individuals. The writing style is very different from that of the Roma Series. I would describe it as le Carré meets Chandler.

GV: This is a difficult question to answer because I read broadly. I have to confess that I’ve been very frustrated with ‘Contemporary Fiction’ because I find many of the authors try so hard to be ‘literary’, by which I mean they try to impress me with their prose or their allusions, as opposed to getting out of their own way and telling me a good story. Quite a few of these books have won prestigious awards and praise and, frankly, I just don’t get it. I read for Character, and many of the books I have picked up or had recommended to me have unlikeable people, or little transformation in the overall arc of story and character. I also find that many of these novels have depressing stories in which life only gets worse and worse — and I do think that such novels are easier to write and less imaginative. I’ll read a book that is a difficult journey. I’ll accept that an ending will not be all sparkles and unicorns, but I don’t care for nihilism, where I have to reach for Thorazine to recover from the time spent between the covers. In all fairness, there are some incredible authors out there in YA, Fantasy, and Historical Fiction. The challenge is finding them. I love finding a new author and reading all their work.

I just recently finished Camilleri’s Montalbano’s First Case. Here, what I found interesting is that the author, after writing twenty novels with the title character, had to ‘regress’ and create an immature, less experienced Montalbano. I’ve also been revisiting Herman Wouk’s Winds of War and binging on the miniseries. Wouk is a forgotten master at storytelling.

GV: This is a tough call. A part of me would like to travel back to the American Revolutionary War era and witness firsthand what went wrong with the founding principles of my own country. While America is, indeed, a republic and patrician elites had created it, I think they would be appalled by what has become of the government. Another part of me would like to live in Dante’s era because the worldview is antithetical to our ‘modern’ one.

Still writing, but I hope with more books and more readers. I want to look back five years from now and see that I am a better writer.

LCR: Thank you so much!