America Is An Idea and the American Dream is For Everyone: Why We Built empowr.com by Michael Cyrus Pousti (Review & Giveaway) 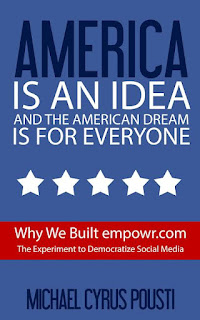 America Is An Idea and the American Dream is For Everyone: Why We Built empowr.com by Michael Cyrus Pousti
Self-published
ISBN: 978-0692510391
Published August 20, 2015
Trade paperback, 194 pages

From a co-founder of empowr.com comes this "Why?" story behind the massive social platform, empowr, that’s been in the making for fifteen years. Learn exactly what drove the participants (founders, advisors, success coaches and 1,000 employees plus 100,000 alpha test users) in their gigantic moonshot project.

After meticulously discussing the "Why?" the author then delves into how empowr has been designed to exploit the exponential characteristics of the web - via its tightly-integrated democratic, economic and educational platform - to deliver opportunity to people everywhere.

The book reads like a manifesto and a manual. One can’t help but come away with newfound or elevated inspiration to dream big, take on their own moonshot project and make a massive difference on the planet.

I don't usually read books that are about politics or economics, but America is an Idea is so much more. Part memoir, part passionate social commentary and history on democratic governments and part explanation of a new social media platform called empowr, this book kept me turning the pages. Written in first-person POV, Pousti is engaging, reflective and passionate in his narrative. Far from dry or boring. I was fascinated to see how technology has and is changing the world.

Michael Pousti is a computer scientist who develops high-tech avant-garde software. As an entrepreneur myself I couldn't help but admire his work and appreciate his motives and at times his self-sacrificing spirit behind work he believes will help not only his country but the world.

I have been an avid student of the Bible for 25 years and have keenly been observing the world affairs because much of what is happening today, even on a political level, has been prophesied. So Pousti's explanation and worry about democracy being broken rings true. He includes facts and graphs and I was honestly quite immersed as I followed his reasoning.

His lofty goal of trying to fix democracy and the educational system is impressive. I agree that an educated society is key to a better world, and that poverty and desperation lead to atrocities as we have seen in many countries. For this reason, I'm glad to have read this book. It was a true eye-opener for me in better understanding politics, world affairs, history and our educational system. Truly, there is a lot of info packed in this 194-page book.

So I eagerly anticipated trying out the empowr platform. I signed up, carefully read the terms and conditions and went through the short videos of step-by-step instructions on how to use this innovative democratized social media. Being someone who doesn't really like social media, I quickly realized this wasn't for me. The idea of gaining fans quickly with total strangers who were just posting content I wasn't interested in felt like a waste of time, even if by doing so I could earn money.

I think the empowr idea and platform is a good one but it needs to be tweaked so that busy business people can customize it to their advantage. I would have preferred to have had the choice of looking up users or citizens (as they are referred to in empowr) that posted useful content in my field. So am I giving up on empowr? No. It's in its infancy stages so I'm sure that with feedback, the founders will make it better.

I think that this book would be excellent reading for all students of political science, for entrepreneurs, computer geeks and those who love social media. I found it to be very informative, eye-opening and educational.

Mike Pousti is the co-founder of empowr, a partnership between academia and tech entrepreneurs that's attempting to deliver a democratized social media experience where the company is governed by its citizens.

Mike began his entrepreneurial journey when he founded his first start-up during his senior year as a computer engineering student at UC San Diego (UCSD). Employing 200 people and generating millions of dollars in profits before the age of 22, his company, Higher Educational Resources Corporation, developed the first commercially successful search engine on the Internet, known as the Arpanet.

His next start-up, Productivity Solutions Corporation, was acquired when he was 24 and two years later, Mike started CollegeClub.com, the world’s leading website for the 18-23 year old demographic.

After the dot-com crash in 2000, CollegeClub.com was acquired, and less than a week later, Mike started Phase 1 of empowr. empowr’s highly patented suite of technologies generated over $150M U.S. and today, empowr's proprietary technologies are used by all major social platforms including Facebook, Twitter, Instagram, Google Plus and Tumblr.

While Mike remains an integral part in the daily operations of empowr, he recently relinquished his CEO position and handed over control of the company to empowr’s citizens, who formally elected their leader (and new President of empowr) via a web-based election.