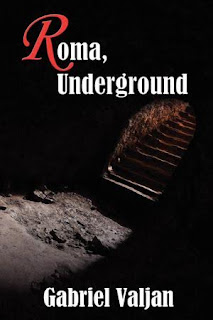 Savvy forensic accountant Alabaster Black is hiding in Rome from her former employer, covert U.S. organization “Rendition.” While there under an assumed name she meets Dante, an investigator, erstwhile explorer and member of the Roma Underground, a band of amateur archaeologists who map the city beneath Rome. With Italian artifacts disappearing at an alarming rate, Alabaster and Dante search for answers and create a trap for the thieves. Through a mysterious online contact Alabaster learns she is being followed, and with her safety at risk she is forced to rethink her chosen alliances and discover hidden truths about herself.

Roma Underground is the first book in the Roma series, introducing us to a set of colorful characters both Italian and American, and takes place in Rome, both above and underground. I was thoroughly entertained as I read this intelligent and well-written thriller with its main character Alabaster Black a.k.a. Bianca Nerini, a kick-ass female forensic accountant who is hiding in Rome from the covert US organization she used to work for called Rendition.

While in Rome, she meets Dante, one of my favorite characters from this cast. He's a friendly good-tempered man who is also an investigator and member of the Roma Underground, a group of professionals whose love of history has them mapping the city beneath Rome, much like amateur archaeologists, with the occasional discovery of precious artifacts.

Add in Dante's boss Gennaro, a hardened but good-hearted cussing man whose wife was murdered by the Mafia, Alessandro, their office mate and Farrugia, the brilliant police investigator and this group forms a band determined to nab the ring leader of the professional thieves stealing Italian artifacts. Meantime, Alabaster is secretly contacted by a mysterious person and discovers she is being followed. After becoming accustomed to living in Rome she wonders if she needs to disappear again.

With so much going on, the plot builds and the reader is left speculating about conspiracy, the Mafia, secret organizations and where the friendship this group develops is going to take them. Valjan ties up everything nicely at the end with the last line of the book making me want to jump immediately into the second book in this series.

I simply loved Valjan's description of things, places, people and situations. Nothing is dull in this book. The author's knowledge of Italian history, its culture, and literature in general is evident in his writing. And the food! I was hungry every time I read this book. It's true that Italians know how to enjoy food and most times when the band met, it was at a different restaurant each time so they could delight their palate as they plotted.

My mother's family is from Rome and I've been there enough times to know that Valjan depicted the Romans well, from their expressions to their way of living. The men in this book can sure cook. Both Gennaro and Dante reminded me of my own dad (who cooks very well) and also my uncle and his son in Rome who both know how to cook fabulously.

This was a great beginning to a series that promises more conspiratorial action, suspense and unforgettable characters. From the author's note, I discovered and was so impressed that Valjan wrote this novel while undergoing cancer treatments. I would love to see this series made into a 4-part movie series like the British TV series (3 90-minute films) based on Aurelio Zen detective novels by Michael Dibdin.

If you love thrillers without too much violence but with intelligent and humorous repartees and descriptions, a complex but smart plot with a great twist at the end, then you are in for a good time with this book. I'm now Gabriel Valjan's latest fan and cannot wait to read Wasp's Nest, the next book in the series. 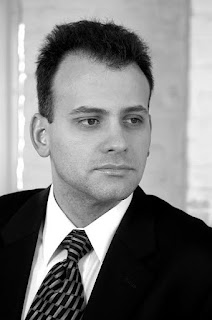 Gabriel Valjan lives in New England, but has traveled extensively, receiving his undergraduate education in California and completing graduate school in England. Ronan Bennett short-listed him for the 2010 Fish Short Story Prize for his Boston noir, Back in the Day. His short stories and poetry have appeared in literary journals and online magazines.

Win a copy of the 4th book in the Roma series.

Disclosure by Laura Fabiani: Thanks to the publicist for sending me this book for review. I was not compensated in any other way, nor told how to rate or review this product.