Mind Over Bullies: A Mob Forms by D.K. Smith (Review and Giveaway) 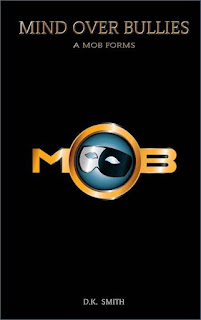 This YA novel with the eye-catching book cover is a fast-paced, action-packed and emotionally stirring read from beginning to end. We begin with an elaborate counterfeiting plot that involves teens and weaves itself throughout the story about a group of kids who take on a superhero role and decide to take action against bullying.

Margo, the lead character is a snobbish pretty girl who hangs around with the popular crowd. Things change for her when she becomes the victim of intense bullying. These scenes stirred up in me such fierce motherly emotions. I have a tween son and a teenager daughter and the thought that something like this could easily happen to them is scary. It made me angry at what some kids do to other kids.

So of course, I loved the whole concept of fighting against bullying and was surprised how a well a male author could portray female teen ways of thinking. Margo was well developed and she grew as a character. She was tough yet vulnerable, pretty yet ugly at the beginning when she displayed unsympathetic traits, smart yet reckless. She was a complex character that propelled the plot along. I felt however that the other characters in the team of MOB needed to be more fleshed out. Perhaps that is coming in the sequel, since the ending alluded to that.

Initially, because of the many action-packed scenes with a variety of characters that played very minor roles in the book, I found myself trying to figure out who all these characters were and how they fit into the story. Halfway through, I was totally invested and raced through the book. The stakes were high and I wondered how things would be resolved. The counterfeiting plot was interesting and it made me think how easily teens could get involved in crime without wanting to. This was another form of bullying and the author succeeded in showing how hard it can be to get out of a tough situation. I would have liked to have seen some parental involvement with at least one of the victims, though. The message needs to be clear that parents are their children's best advocates.

Although this book explores the very-real topic of bullying, because of the superhero element in the story, the reader will need to suspend belief. Parents were scarce throughout, the kids skipped school and never did homework or projects, and police investigators dealt with serious criminal matters by involving teens without parental permission.

If you like the superhero complex, (I do! I grew up watching Wonder Woman and Spiderman) then this book will appeal to you. Once the MOB team was created and took action, I could almost hear the Matrix music in the background of my mind as they proceeded to fight bullying worldwide.  I look forward to reading the sequel and seeing how the exciting MOB will tackle not only bullying but their worldwide spreading fame.

A 38 year old native of Los Angeles, Mr. Smith began his writing career after getting news that he would soon become an uncle. Wanting to create stories and characters for his expected niece, he created the children’s book series “Sock n Boots Adventures.” The two characters (three year old Sock and five year old Boots) began to make names for themselves, generating downloads in countries around the world.

When asked about his motivation to tackle the subject of bullying in a 108,000 word novel Smith said, “One day I came across a story in the news about a young girl that jumped in front of a subway train after weeks of bullying. As I investigated further, I was shocked at the number of similar stories I encountered. Bullycide, the news was calling it. I thought, wow, what if these young people had been shown that the pain of bullying can be handled without hurting themselves or someone else.”

Ultimately it was thoughts of his now four nieces and three nephews dealing with bullying as they get older that weighed heavily on the decision for Smith to write the story about bullying. “I recognize that the characters and situations in the book may not represent every bullying situation and that realistically the book won’t change the world, but I do sincerely hope that it sends a subtle message about there being life after bullying. We’ll just have to see how the public receives it,” Smith said.

A lover of mystery and espionage stories, Smith is a fan of everything James Bond. A favorite scenario is to see a character in an impossible situation get out of it at the last second or have the odds against them and see he or she turn the tables. Acting on the love of espionage and mystery, Smith has a new novel in the works centering on a James Bond-type character of his own creation.