Upper West Side Story by Susan Pashman (Review and Giveaway!) 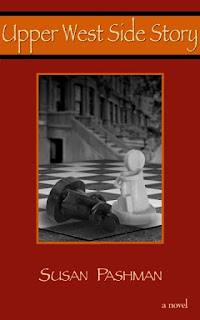 This is an excellent book, a very emotional one. The title is perfect as it refers to a classic story that was made into a Broadway success, but with a different twist. The book cover is brilliant!


The story is told through the eyes of Bettina, a professor of Women's History in New York's ultra-liberal Upper West Side, and that of her 13-year-old son, Max. When Max becomes embroiled in controversy following an accident involving his best friend, Cyrus, who also happens to be black, racial hostility erupts engulfing their families and the community. Political tensions arising from the accident threaten to destroy people and friendships especially that of white Bettina and black Viola, Cyrus' mother.

The author deftly weaves the threads of jealousy, simmering resentment, racial prejudice and suspicion to produce a tapestry of modern-day life in America, as recent events have shown. It is a novel that is of the moment, that touches on some very delicate topics, race and poverty among them.


My favourite person is Max. I wanted to hug him. His entire world is changed in a moment and he subsequently becomes a victim in a bewildering set of heart-rending circumstances. His strong character and resilience enable him to endure.


I would have liked to know more about Viola who came across as a wonderful person from the few things we learned about her. No wonder Bettina desperately wanted to maintain their friendship.


I felt sorry for Bettina at times. Not only is her fierce protectiveness of her beloved son tested, but so is her view of people she thought she knew and respected. Even her therapist doesn't seem sympathetic. At other times I was angry with her for provoking problems that could have been avoided. In short, a well-meaning, but naive person with her head in the clouds in some respects, completely unaware of resentment on the part of some in her community towards her.


I liked the author's descriptions. For example, she writes, "City Hall, like any workplace, has its subterranean rivers and streams, and messages that sail, like notes in bottles, down through the corridors, spouting out at water coolers, drifting from one cluttered office cell to another, and creating what comes to be perceived as "the air."  There's something in the air," people say; "there's word going around."


The subjects of friendship, race, fear, strong family ties, resilience and forgiveness are highlighted in this novel that I highly recommend.

Susan Pashman is a philosophy professor and former attorney. While in law school, she served a year in the New York City Council President's office; some of what she learned there has found its way into this story. But most of this book derives from her experience of raising two boys on her own in Brooklyn. Many of her sons' childhood exploits, and the hopes and fears she had for them, became the heart of this novel. She resides in Sag Harbor, New York, with her husband, Jack Weinstein.