The Artisan's Star by Gabriella Contestabile (Review and Giveaway) 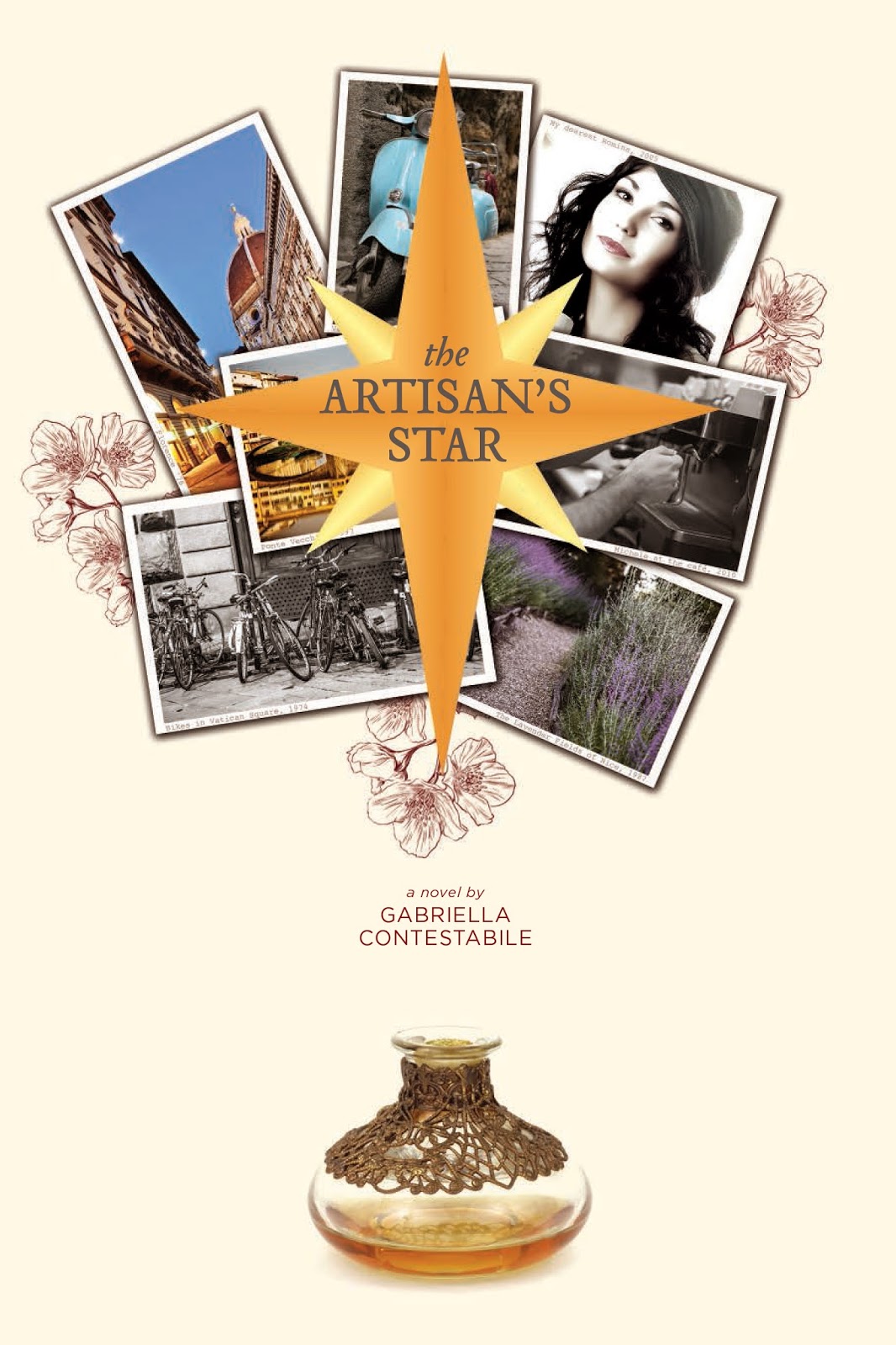 Gabriella Contestabile has written a novel that truly captures the essence of perfumery and Florence. The story revolves around Elio, an artisan who lives with the regret of his unlived dream to create his special perfume. He's had the gift of smell since he was a child, and he studied two years in France as a youth but returned to Florence disillusioned.

The story begins with Elio as a man in his sixties but goes back and forth in time to his youth and we learn about the women in his past who influenced him in various ways: Elena, his Greek mother, who recognized his gift but left him with his father to return to Greece when he was only ten. As a mother, I could not understand this and I felt for Elio as a child. Then there was Palma, his teacher and French lover, who pushed him to learn but also exploited Elio's gift and naivete. Marina, feisty and unconventional was his first love and in some ways replaced the love he craved from an absent mother.

Elio's daughter Romina, is also an artist but she does not want to inherit her father and mother's perfume shop. Elio has to come to terms with the changing times and his unfulfilled dreams. And finally he does in a satisfying and moving way.

This book is very much character-driven with much descriptions of the Florence way of life, food, culture and arts. It's very detailed in this way and Contestabile puts you in every scene fully so that you could taste the crostini and Prosecco, you could see the streets lined with shops and the Arno River. But most of all, the author goes into much detail about perfume making. It made me so curious about all the flowers named and gave me a whole new perspective on the art of perfumery.

Contestabile really gets the Italian way of thinking. Every scene and conversation reminded me of those I had in Italy with my own relatives and friends. It made me nostalgic for Italy. It made me want to visit my aunts, uncles and cousins in Rome again. It made me want to smell the perfumes she names in the book.

The book begins slowly and Contestable takes her time to create her characters. If you're expecting fast-paced action, you won't get it in this novel. The pace of the book is much like the pace of life in Italy, slow and full of the joys of celebrating the senses.

An interview with Gabriella Contestabile


I was curious about a few things after reading The Artisan's Star, so here is an interview with Gabriella who was born in Italy but emigrated to New York in 1959.

LCR: You wrote this story from a male point of view. Was this hard to do?

GC: Elio, the main character, was actually the easiest to write. He’s my father in word and gesture, a very expressive man who found joy in the simplest things. He once came to my office with a tray of cappuccini from a local Starbucks. I was foolishly embarrassed that my father would just appear and interrupt a business meeting. But my co-workers loved him. We did pause, to savor a cappuccino and his enthusiastic stories about Italy, and came away from that experience elated, informed, and all the more productive in the hours that followed. I learned an important lesson that day. Over the years Elio’s internal dialogue became my own. It was an evolution from one generation to the next, although in the same character. Like Elio I started to question where and how to re-direct my own life’s journey.

LCR: Sounds like you're close to your father. I can understand this as I am very close to mine. In your book you make a reference to the Guerlain quote about the time of day – Dusk. This came up at the beginning and then tied up the story beautifully at the end. How and why did you use this idea?

GC: I was in Paris working with my colleague Marc, from Prada. We talked about Guerlain’s inspiration for “L’Heure Bleu” and Marc recited the quote. “It’s that time when the sky has lost its sun and has yet to find its stars.” It struck a chord, that later became the anchor, the center around which the entire narrative turned. It is a metaphor for that stage in our lives when we have lost our youth and all those seemingly infinite possibilities. But even though the sky is now dark the stars will soon appear, along with re-imagined dreams, those possibilities we can only realize through the wisdom and depth that come from years of living, learning, and making all the necessary mistakes along the way.

LCR: Your book is filled with interesting characters. Where do you get inspiration for your stories?

GC: Long walks, books, social issue I care about, looking at art, conversations with real people going about their daily lives. I love impromptu conversations on the subway, at a doctor’s office, in a café. I’m sure every writer can relate to this. You have days when you are overwhelmed with the tasks of living and you worry you won’t have time to write, or you won’t be able to focus when you do. Then, at some point, during the course of running an errand something takes hold. It may be the young man filling his cloth bag with apples at the farmer’s market, the old woman you help step on to the bus, or that annoying co-worker who suddenly becomes an interesting character in a story you have yet to write. And then there’s my family and friends who invariably say something funny that sparks a line of dialogue or a scene. Both my husband and daughter have a sharp-witted sense of humor, so I’ve plagiarized their words for specific parts of the novel.

GC: A collection of short stories set in Italy. One story was actually the very first incarnation of “The Artisan’s Star”. It’s based on the time I spent working in an actual family-owned perfumery in Florence named Profumeria Aline. The other stories take the reader to various parts of Italy including my hometown, Avezzano, in the province of Abruzzo, a beautiful and unspoiled region that’s yet on tourism’s radar, so it still feels like the Italy of my younger days. Art, in different forms, figures in each story in some way.

I’m also re-working a screenplay based on “The Artisan’s Star.” The book has always felt cinematic to me. I can visualize Elio opening the shutters, and the colors of the Tuscan dawn spreading over the Arno. Writing the screenplay helped me with the dialogue for the novel. So one genre informed the other.

LCR: Yes, I can see your book as a movie. And all that talk of food! I just have to ask, what is your favorite dessert?

GC: Affogato- a true espresso poured over gelato, my two favorite indulgences in one. When I was little my mother would whip an egg yolk with sugar and pour in either a few drops of Marsala or espresso. I would have to say Tiramisu ranks way up there too.

LCR: My mother used to whip an egg york with sugar for me too! And I love Tiramisu too. :-) Okay, so let's talk about books. If you were stuck on a deserted island, which 3 books would you want with you?

GC: I would always need a library. I love too many books. But there are jewels among them. Notably…

1.To the Wedding by John Berger

2. The Leopard by Lampedusa

3. A Tale of Two Cities by Dickens

4. The Namesake by Jhumpa Lahiri

5. The Lover (and every other book) by Marguerite Duras

6. The Years by Virginia Woolf

LCR: I've only read one book from your list: A Tale of Two Cities. I've been meaning to read The Namesake. Okay, last question: Any hobbies or quirky thing you like to do?

GC: I love world dance, especially Indian dance so I take Masala Bhangra at Alvin Ailey studios. Masala Bhangra was created by a beautiful and dynamic young woman, Sarina Jain, as a dance/fitness regimen, a tribute to her culture and her father who died of heart disease at an early age. I love it because of the music and because it is so joyful. There are lots of leaps, swirls, and vibrant choreographed movements. The exuberance feels very Italian.

I dream of dancing for hours at an Indian wedding. In the meantime I will watch Monsoon Wedding and every movie by Mira Nair. I ‘m also a big fan of Jhumpa Lahiri.

LCR: I love Indian dance too! My kids and I love to watch Bride and Prejudice, the Bollywood version of Austen's Pride & Pejudice. The music and dancing is awesome.

Thank you Gabriella for giving us a peek at your interesting life and passions! 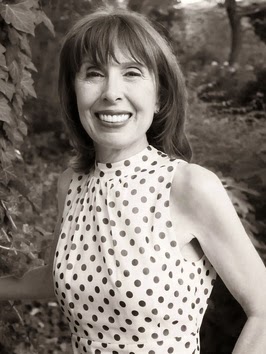 Gabriella Contestabile is an author, educator, and owner of SU MISURA JOURNEYS, a boutique travel company connecting people to the artisans of Florence. She emigrated, with her parents, from Italy to New York City in 1959. In her pre-writer life, she worked as a foreign language teacher, management development specialist, and fragrance/cosmetics executive. Gabriella is a strong advocate of the arts, of multiculturalism, and of social justice—a passion inspired by reading Dickens and Dante at a very young age. She has been an active volunteer with Dress for Success for over eight years and is a member of the Slow Food NYC Food and Farm Policy Task Force. She lives on the Upper West Side with her husband, her daughter, her mom, and a furry Shih–Tzu named Oreo. ‘ The Artisan’s Star’ is her first novel. She is currently working on a collection of short stories, also set in Italy, and a screenplay.